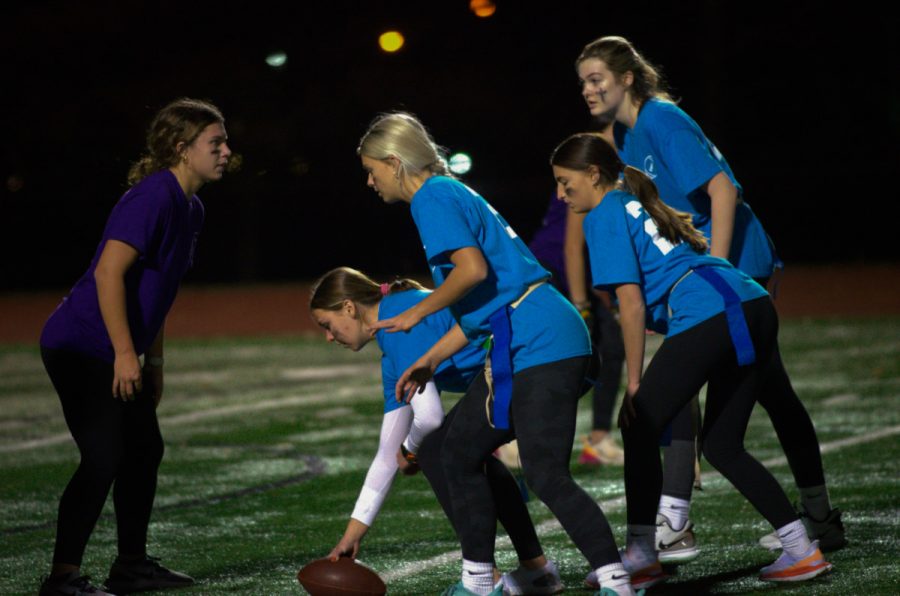 After canceling the previous year’s games because of COVID-19 restrictions, the RBHS student council held the annual PowderPuff tournament Thursday, Nov. 2. PowderPuff is a touch football game and is played by anyone not already on the official school football team. Students signed up to participate on a first-come, first-served basis a few weeks prior. The seniors and juniors had teams of 25 each, while the freshman and sophomore classes had one combined team of 25.

Sophomore PowderPuff running back Ayan Omar said she joined PowderPuff once she heard it was good to go this year.

“I signed up for PowderPuff because I had heard that it was super fun,” Omar said. “I was eager to do it because last year it didn’t happen due to [COVID-19].”

Omar’s team of freshman and sophomores first played the seniors and won. They then defeated the junior class team and took first place in the tournament. The seniors played the juniors in the third round and won, claiming second place.

“I had a ton of fun, and my team went undefeated which made [PowderPuff] even better,” Omar said. “I think my favorite part was how hype the bench and the coaches would get when we would score a touchdown—it was really fun and got us hyped.”

Although junior Sophia Klimek’s team did not win, she said she was just as thrilled as Omar to play. Klimek said she enjoyed playing quarterback when she was a freshman, spurring her to partake in the games this year as well.

“I loved the competitive aspect of it,” Klimek said. “And I loved that all different kinds of people played [like] soccer players and softball players.”

The PowderPuff tournament brings students together from all grade levels. Junior Rachel Griffith, who also participated freshman year, said this was why she was excited to join a team.

“I loved how hype it was and all the energy the teams brought,” Griffith said. “My favorite part was getting to spend time at practices and the game with my friends, and celebrating together.”

Omar, Klimek and Griffith all said they were looking forward to playing again in next year’s PowderPuff.

“I think everyone from this year’s team had a ton of fun,” Omar said. “And [I am sure they all] want to play next year.”

Did you participate in PowderPuff this year? Let us know in the comments below.