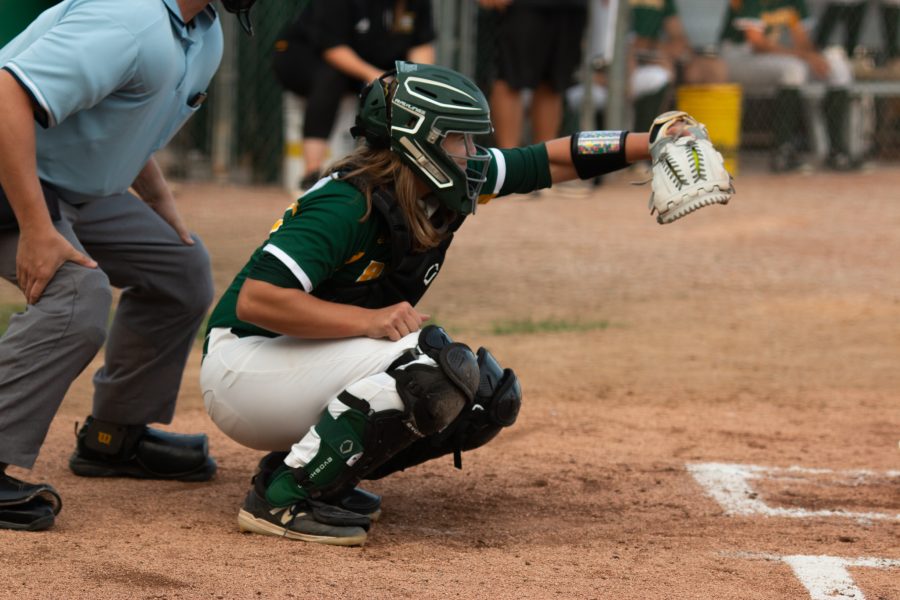 Abby Hay (10) catches the ball pitched to her by Ella Schouten (12). Only being a sophomore Hay’s talent shone through making her the starting catcher for varsity softball. Hay caught the entire game with no errors. Photo by Emma Hake.

In a tense game, the Bruins eventually won their match against Capital City High School (CCHS) 2-1, bringing their record to 5-0. Both teams championed strong pitchers that struck out batters for the first four innings, leading to a defensive stalemate.

No points were scored until the fifth inning, when the Cavaliers scored on a single from third base. CCHS pitcher Lydia Coulson made it difficult for RBHS to score, but the Bruins’ senior pitcher Ella Schouten was also playing at her best. Schouten struck out the opposing team in the first two innings. The Bruins had won their previous games in landslides; this was  the first game in the season they had to struggle to win.

“I think some challenges that we have faced is that we have seen a lot of good pitchers. Last night [Coulson] for Capital City pitched a really good game,” sophomore Sophie Schupp said. “Sometimes it takes us a little longer to figure them out.”

After some time however, the Bruins cracked Coulson. They were able to adapt to her pitches. Going five innings without a point had both teams on the edge of their seats, but after CCHS scored a point to put them in the lead, the Bruins still pushed through. The Bruin’s resolve allowed them to come back strong in the sixth inning. Schupp hit a two point home run, putting RBHS back in the lead and winning them the game.

Coach Lisa Simmons said this game was a good challenge for the team. “Our kids were giving maximum effort and it was good we were put in a tough spot,” Simmons said. “We were in some tough, close games last year and I felt we did a great job not trying to press.”

Unlike last year , this year the softball team has had to struggle with new COVID-19 restrictions. Regardless the girls have stayed positive. “Some expectations for the rest of the season is just to keep playing as a team,” Schupp said. “To keep having fun with everybody on the team.”

What did you think about the Bruins’ performance?