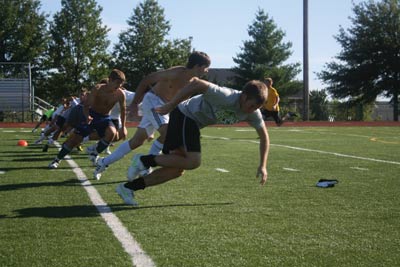 Cut to the chase: At practice, senior captains Matt Kelly and Sam Stoeckl make a turn in a suicide run. The excessive running was a result of not completing 33 out of 100 goals in an earlier drill at the team’s practice.

Maddie Davis
The phrase ‘Boomtown’ pumped up the soccer players and fans last year, but with a new team came a new saying. Thanks to senior captain Matt Kelly, the boys now have ‘Sav-City.’
The overall purpose of both phrases may remain similar, but the meaning of ‘Sav-City’ relates much closer to the team’s style of play.
“‘Sav-City’ stands for Savage City, and we’d like to apply that to the way we play,” Kelly said. “We wanted something different than Boomtown because we are a different team, and Sav-City inspires us to play aggressively and wildly, just like a savage would.”
After tying for third at state last year, the team’s motivation to become state champions has only grown larger. The Bruins are determined to further their winning record. Along with their hands-on style of play and mindset, the boys use practices to improve technique and skills on the actual field.
“We try to put ourselves in a more possessive type of game,” sophomore Salim Gumati said. “We like to pass the ball around and get ourselves going. We have a really solid defense, along with a controlling midfield. We work to be the strongest, toughest and best team out there.”
With the upcoming Catholic Youth Council tournament, the boys prepare to prove themselves and their improvement from last year. Sept. 19-24, the team will face Lindbergh, Christian Brothers College and Trinity at the tournament. Last year the Bruins had a record of 1-2 and did not make the tournament.
“We feel good going into the [CYC] tournament,” junior Tripp Sheehan said. “Our record so far proves that we are capable of winning so it will be no different.”
In order to secure a win, the boys focus on learning from past games. On Aug. 27 the team lost 0-1 to Rockhurst. Despite the upset, the Bruins stay optimistic.
“We can do better than we did during the Rockhurst game, but they are defending state champs,” Sheehan said. “We were upset after losing, but now we know what it’s like to play in pressure games and we are really looking forward to playing them again.”
The Bruins try not to focus on their loss and hope not to have a repeat of it. Along with Kelly, fellow seniors Kory McDonald and Sam Stoeckl help to keep the team on the winning track, leading by example.
“Sam keeps everyone in line in the back and keeps them in check at all times,” Gumati said. “Kory takes care of the midfield, controlling spacing and just keeping it in shape. Then Matt Kelly leads us on the top, always hustling and scoring. It’s easy to look to them.”
Though the Bruins’ main goal is to win state, their immediate focus is on upcoming games and tournaments. Specifically, the boys look forward to their upcoming match-up with crosstown rival HHS.
“The Hickman game is always a good one,” senior Ty Griggs said. “The natural rivalry brings good competition. We want to win, but it’s important to treat this game like any other and just give it all we’ve got.”
By Maddie Davis
Delete Image
Align Left
Align Center
Align Right
Align Left
Align Center
Delete Heading