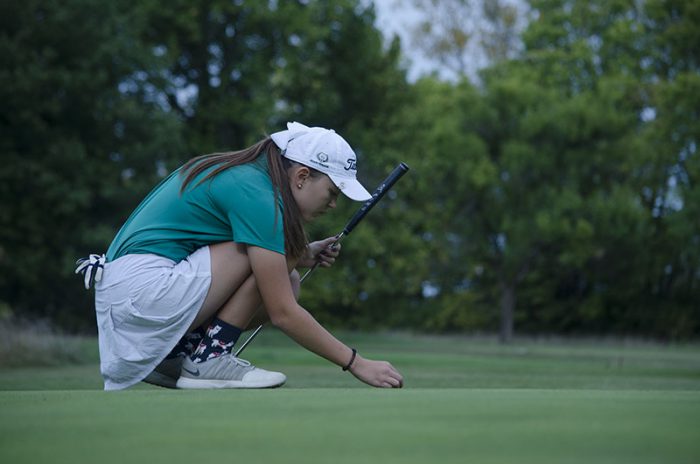 he girls’ golf team took part in the Warrensburg Invitational Friday, Aug. 24. As a team, the Bruins shot a 323 and won the tournament. Senior Olivia Sowers finished with the top score of 74.
“I would say it was a great way to begin the season,” Sowers said. “The overall outcome was awesome because we won as a team. It was a great experience for our JV players to get more competitive play under their belt. Winning is always fun, so hopefully we can keep the trend going and have a great season.”
Finishing in the top 10 individually, junior Maddie Orr was happy with the team’s performance because she believes the end of last season didn’t end as the Bruins hoped.
“Starting like this shows that we have a lot of potential,” Orr said. “We have had 14 practices and lots of team bonding, but most of the preparation was individual and during the summer.”
The time spent in the summer getting to know the team proved advantageous in the tournament for sophomore Abby Baker. She said she set high expectations for herself because she knew where her spot was on the team was.
“As the team came together we talked about our rounds, just like we always do laughing at our mistakes,” Baker said. “It’s nice to be apart of a team that is very supportive of one another by bringing out the positives and knowing we all can have fun no matter what happens.”
Looking back, Orr sees a strong team that will be able to see success throughout the season.
“A strength would be how well we performed so early in the season and how strong our team is,” Orr said. “There’s always things to work on in golf and we just need to keep practicing and working on all aspects of our game.”
How will you cheer on the girls’ golf team this year? Let us know in the comments below.