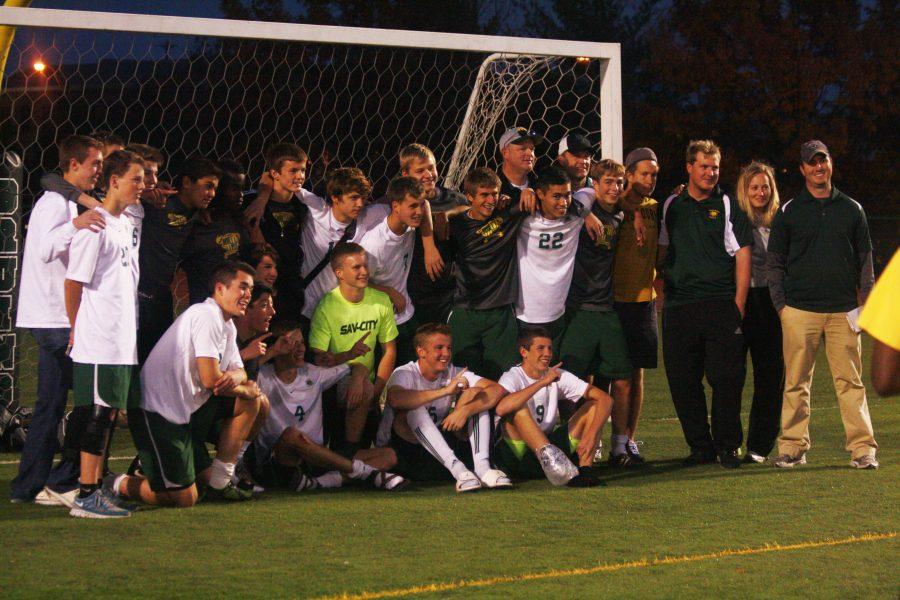 Posing for pictures, the Bruins celebrate their third consecutive semifinal win. They will compete against Chaminade for the state championships in Blue Springs Nov. 16. Photo by Stazi Prost.

Alyssa Sykuta
The Bruins boys soccer team (22-7-1) will take on Chaminade (24-2-2) tomorrow at Blue Springs South at 6 p.m. With two consecutive years of third place titles at their backs, the boys hope not to repeat history for the third time in a row.
RBHS played Chaminade earlier in the season at the Midwest Classic in Indian and lost a nail-biter game after going into overtimes and penalty kicks. However, senior defense Nick White said the team feels confident going into this match nonetheless. The coaching style of head coach Alex Nichols, he said, has helped to prepare the team for Friday night’s game.
“Nichols is very good about coaching for strategies and playing styles,” White said, “so he changes up what drills and things we focus on in practice.”
White admits he is not completely fearless, wary of Chaminade’s “very big” and “very skilled” center midfielders. Though the competition against Chaminade to move on in the state tournament will be difficult, White believes the Bruins have a definite chance of earning their way into the state championship game.
“Last time defensively we actually played them really well. We only gave up a couple of shots on goal; they just got lucky,” White said. “But we studied them a lot and know how they, like, [throw] balls on the ground so we worked a lot on that.”
By Alyssa Sykuta
Delete Image
Align Left
Align Center
Align Right
Align Left
Align Center
Delete Heading