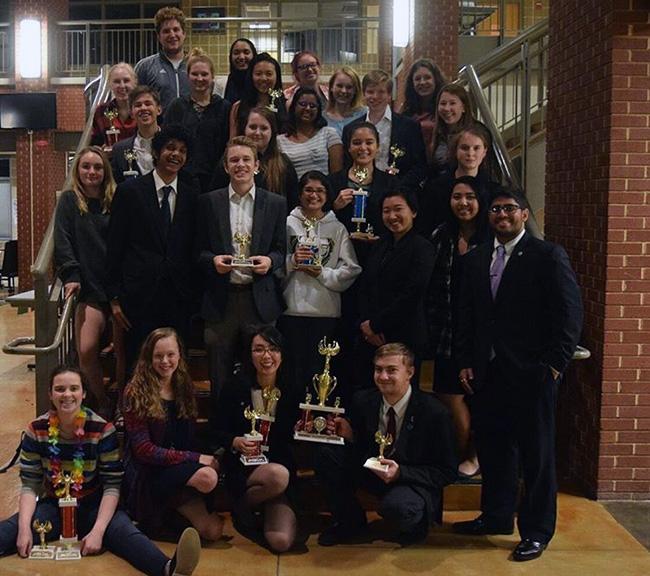 Will Cover
[dropcap style=”light” size=”4″]A[/dropcap]t the Clayton/Ladue Speech and Debate Tournament over the weekend, the RBHS Speech and Debate team continued to place well, continuing a trend of scoring high throughout this season.
The tournament coordinators split the event into two separate schools, with Novice competing at Ladue and Varsity competing at Clayton, both placing at their respective tournaments. Varsity placed third in sweepstakes, which is a ranking of all the schools based off of how they did at the tournament, and Novice placed fourth. RBHS won fifth place overall at the tournament when results from the two tournaments were combined.
The Speech and Debate team had a total of 14 people place in the top six of their events and nine in the top three in the members’ events.
Sophomore Memphis Cutchlow, who placed first in Novice Public Forum Debate, said she enjoyed the tournament, especially since everyone did well.
“This tournament in particular was a really cool experience,” Cutchlow said. “My partner and I did so well, but the environment was also fun and competitive.”
Co-captain of the team and senior Joshua Vincent said there has been a notable difference in team size and overall performance.
“Rock Bridge has done very well this season, with multiple people going to [elimination] rounds at each tournament,” Vincent said. “There has definitely been an increase in size since last year … [and] a performance difference from last year.”
As the Speech and Debate team grew to 54 members this year, the team has done better overall. More competitors have advanced to final rounds, and the team has already placed in sweepstakes at two out of the three tournaments they’ve competed in, while last year only placed in sweepstakes once.
The team’s next tournament will be Dec. 1-2 at Mexico High School.
What topic would you most want to debate?
Delete Image
Align Left
Align Center
Align Right
Align Left
Align Center
Delete Heading