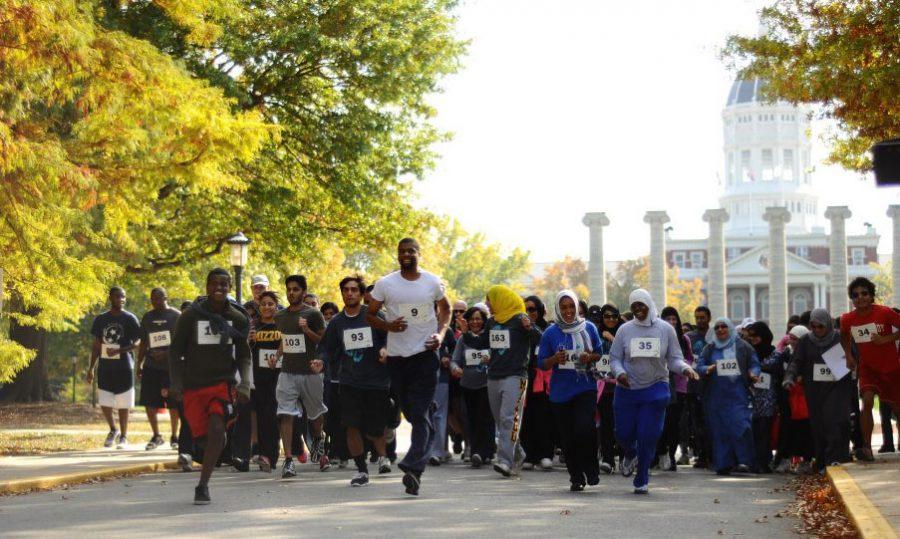 Runners start off the race the foundation held last year. Photo used with permission from the Foundation.

Nomin-Erdene Jagdagdorj
Three years ago, senior Jude El-Buri lost her older sister, Rehab El-Buri, to malignant melanoma. The El-Buri, through their grief, started the Rehab A. El-Buri Foundation to continue the work Rehab had started, Jude El-Buri said. To raise awareness for the foundation, the family started the Race to Action last year.
This year’s Race to Action will be at 8 a.m. tomorrow, Saturday, Nov. 3, at Peace Park.
“This event is representative of the legacy my sister has left behind,” Jude El-Buri said, “because it voices to the community what she believed in: helping those in need, giving voice to the voiceless through journalism and doing small things could have a big impact.”
The foundation has raised funds for a community grant to The Wafa House, scholarships at the University of Missouri-Columbia’s School of Journalism and the Rutgers School of Communications and Eid gifts in the Memorial Sloan Kettering Cancer Center, among other organizations.
However, the money and awareness raised are both symbolical of everything for which Rehab El-Buri stood. Jude El-Buri said the event, like her sister, aims to help those in need and give “voice to the voiceless through journalism.” It’s a remembrance senior Duha Shebib has participated in since the event’s start.
“I knew Rehab [El-Buri] all my life as my best friend’s older sister who would always encourage our creative dances and games,” Shebib said. “After she passed away and I learned about the impact she left on the community. … I became inspired to also give back and decided to get involved with the R.A.E. foundation.”
Shebib was involved in the registration committee to plan for the event, but will also be volunteering at the event. She said she will be greeting the runners, giving them their race information, and signing them in.
Senior Muhamedali Khenissi, however, will be running the race for his second year. Last year, he got third place, a surprise that spurred him on to try running cross country for RBHS.
Running for RBHS has given [me] a ton of awesome memories, so I’ll always remember this event. … I definitely owe so much to this race,” Khenissi said. “This year I wanted end my cross country season there, so I signed up as soon as I could. … To get a chance to help continue her legacy whilst having fun and competing is a pretty cool setup.”
El-Buri said she has had lots of people like Khenissi and Shebib approach her and ask what they could do to help, which has kept her “faith in humanity high.”
“It’s really touching to see so many people, friends, family, and community, being so supportive and helpful,” El-Buri said. “Melanoma doesn’t discriminate against anyone, so it’s important to the community because it reaches out to everyone to come together to fight for a cause.”
By Nomin-Erdene Jagdagdorj
Though early registration for the Race to Action ended Oct. 27, you can still help the Rehab A. El-Buri Foundation by donating here.
Delete Image
Align Left
Align Center
Align Right
Align Left
Align Center
Delete Heading