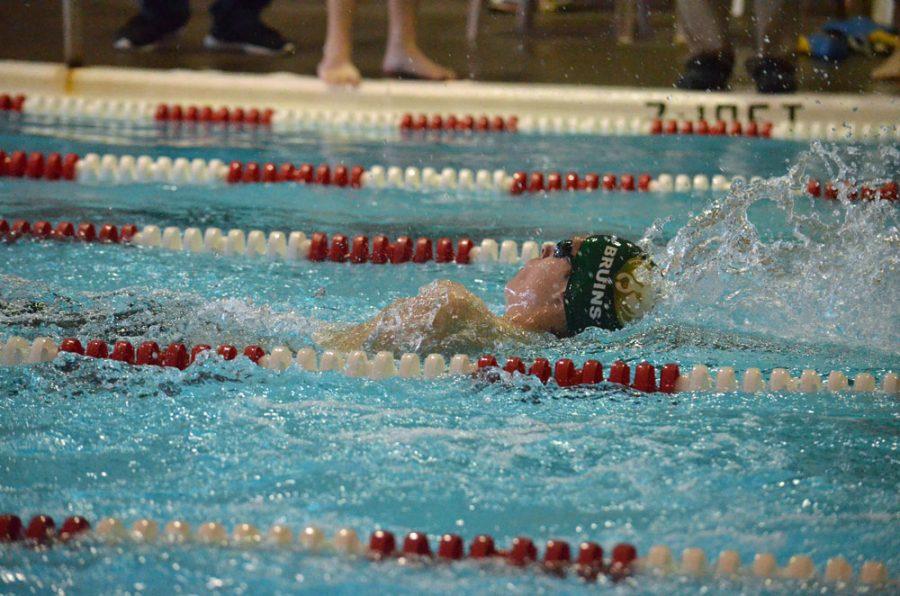 A swimmer representing RBHS competes in the 100 yard backstroke at the 'Last Chance' meet Nov. 9, 2013. Photo by Karina Kitchen

Two months into the swimming season, the boys’ swimming and diving team have started to set the pace with a fourth place finish at the Cape Central Invitational Oct 1.
Junior Ryan Gilbert said going into the meet the intentions were focused more on individual times rather than winning.  Yet the boys were able to claim the fourth place rank as a team, three points behind the Lindbergh Flyers, who placed third with 220 points.
“The meet consisted of basically Cape Central winning most of the individual events and all of the relays, with us, Lindbergh and Ladue fighting with our depth for the spots after,” senior Jack Allen said.  “Overall, throughout the whole meet we were definitely one of the better teams there, but Cape Central was for sure the most dominant team there today.”
Head Coach Zach Mertens went on to discuss the meet itself, elaborating on the competition and the different factors which played a role in shaping its nature.
“The competition at the meet was some of the fastest ever entered, so we were pleased with the overall result,” Mertens said.  “Last year the boys team won the meet, and this year, even though we got fourth, they would have beaten last years team in total points.”
Though the state championship is only a month away, many of the swimmers have already began working on their drills before moving to their ultimate goal of racing in the most competitive meet in Missouri.  Despite there being only 34 days left to practice, state cuts, or the required time needed to perform at the state meet, are constantly being rooted in the team before the state championship meet arrives.
“At this point during the season, we’re training very hard and we’re not tapering for peak performance,”  Gilbert said.  “I already had state cuts in the events that I’ll likely be swimming at state, but having others is always good.”
Already having state cuts is a weight off the shoulder for Gilbert as his focus can be transferred to his form, technique and speed.  Though these times are continuously on every swimmer’s mind, Allen believes there’s more that goes into a swimming competition.
“I think as a team we were just trying to get better at racing and try to win or at least place pretty well as a team.  Cape Central was there and they’re a good team, so any time we get to race them it’s an opportunity to compete with one of the better teams in the state,” Allen said.  “Individually, I just wanted to get somewhat close to a best time and compete with whoever is next to me.”
Before that, however, the team will need to take the first step in their next major meet, the COMO invitational, taking place on Oct. 8 in the Mizzou Aquatic Center.  With only five more meets before the state swim preliminaries begin, Gilbert is gearing up for best swim.
“Our most important meet behind state, the COMO invitational, is coming up this weekend.  From there, I think we’ll tone down the yardage and start working on speed,” Gilbert said.  Having won [state] last year, we can definitely feel the pressure and the metaphorical target on our back.  With that in mind, I think we’ll be going to go into state confident, but aware of the challenge.  It’s always a fantastic opportunity to race the fastest in the state.”
How do you think the team has been executing in this season’s meets? Comment your thoughts below!