Upperclassmen end the year with pranks 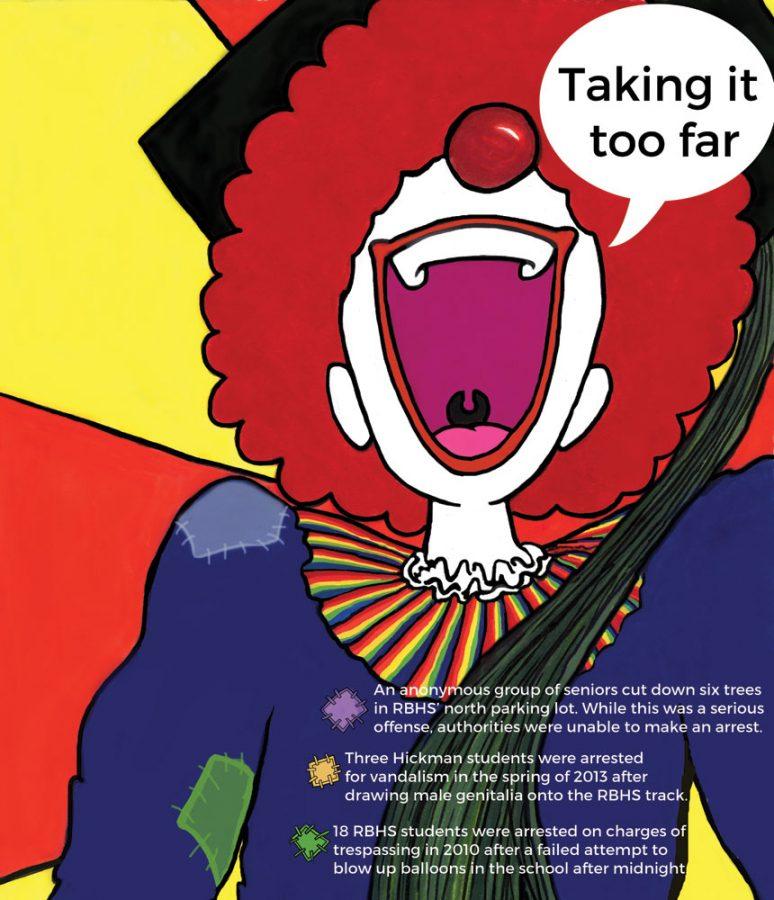 Graduation is a time to commemorate on the past. After four long years of hard work, seniors celebrate with events such as prom and the senior all-night party. One tradition that stands out, however, is senior pranks. These shenanigans leave lasting marks on students.
For instance, senior Sam Schwartzkopf recalls a few escapades he witnessed seniors pull during his three years at RBHS.
“I remember when they wrote all of these things all over the glass in the north commons. [There were] red solo cups and that made [the cups] really hard to clean up,” Schwartzkopf said. “I heard of the time that the seniors a couple years back drove motorcycles through the main entrance all the way to the north commons. That was pretty cool, but I’m not sure if I can get away with that now.”
Senior Prince Chingarande began his RBHS career last year. He had never experienced senior pranks before, so the antics were surprising for him.
“Funnily, when they were pulled last year, I didn’t even know it was a thing,” Chingarande said. “I got to school and was like what in the heavens are these water cups doing in the north commons?”
Despite the initial confusion, Chingarande has grown fond of the pranks, fond enough that he plans to pull his own. He hopes to be remembered as the senior with “the weirdest prank ever.”
“I’m going to wear a diaper, run around the hallways yelling and hitting two sauce pans together,” Chingarande said. “I think they reflect how free-willed we are and not ashamed to show our weird sides.”
Schwartzkopf said these pranks are, for the most part, wholesome and harmless. This, however, has not always been the case for past pranks at RBHS. Victoria Yu, a 2010 alumna, recalls a prank going awry. The attempted hijinks ended with the arrest of 18 students.
“I remember hearing about a group of students that somehow managed to enter the school building past midnight trying to pull a prank but ended up being caught and arrested,” Yu said. “The students had with them a bunch of balloons and pennies. They were caught before they could fully go through with the senior prank plan.”
Assistant Principal Dr. Lisa Nieuwenhuizen reminds students that other things can go wrong with senior pranks, such as property damage and the disruption of class. She stresses that seniors should recall that their freedom comes with responsibility.
“Some pranks require extensive cleanup or repair to school property,” Nieuwenhuizen said. “This is vandalism and is treated as such, with school and legal consequences when appropriate.”
Schwartzkopf agrees with Nieuwenhuizen. He sees messy pranks as inconsiderate to janitors. His ideal prank focuses on the temporary disruption of students.
“I would love it if they hid airhorns all over the place. … There are these really small almost bluetooth-esque kind of remote control things you can set off where you just tighten an airhorn and let if off for five seconds,” Schwartzkopf said, “not long enough for them to find it but long enough to disrupt things and have those all over the place.”
Yu and Nieuwenhuizen are in consensus with Schwartzkopf. All three agree that the controllable, cleanable pranks are best, especially when it comes off as funny or bizarre. Despite this support, Schwartzkopf doesn’t plan on pulling a prank.
“I feel like the people who do the senior pranks are the same people, or the same type of people,” Schwartzkopf said. “They’re never people like me, they’re usually like student council [people].”
Beyond just the title of ‘student council member,’ Schwartzkopf believes the constant involvement in the school has made these students more willing to use their time to pull a prank. After all, it is their last chance to bring some fun into RBHS. While Schawartzcopf believes these pranks are ignored as he and other seniors look towards their futures, Yu looks back at this period fondly.
“Looking back, I think it’s okay to have a little fun through senior pranks, as long as students are still responsible. Pranks should not result in property damage, offend anyone or break school policies,” Yu said. “If a mess is made, those who participated in orchestrating the prank should help clean up the aftermath.”
infographic by Ana Ramirez; source: Columbia Daily Tribune, Missourian