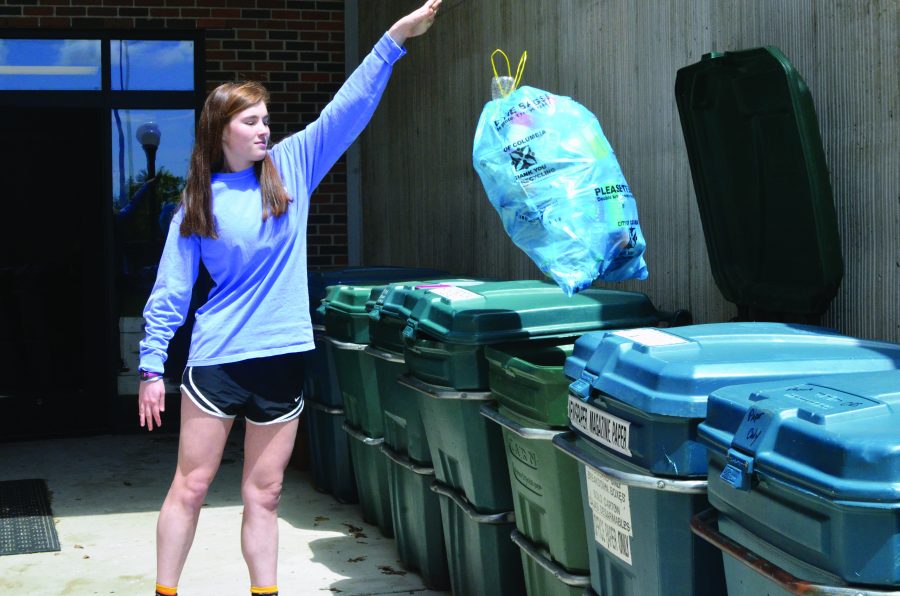 Recycling is one of the best ways to help our environment because it saves energy, conserves natural resources and prevents pollution. Many people know this, yet there is not as big of a drive to recycle as one would hope. Recycling is available in each classroom at RBHS. The school only recycles paper, not cardboard, plastic, tin or glass. But by only recycling paper, the school is not recycling as much as it could.
We must start making more of an effort by recycling everything we can. Almost all students have disposable bottles that could be recycled. If bins made specifically for bottles or cans were around school, then students would always be able to recycle. We have 33 trash cans set up around the hallways and common areas, which are necessary for trash, especially at lunch time, but if we had more specific recycling bins around the same spot, all the students and faculty would have the opportunity to recycle everywhere at RBHS.
By having each bin labeled so that everyone knows what goes in all of them, recycling can be an easy process.
According to a report by Heritage Environmental Services, the five reasons people don’t recycle is because they view it as inconvenient or confusing. Also, they say it doesn’t make any overall impact, “I’d do it if someone paid me,” and “I don’t want to be green.” Currently, fewer than 35 percent of households and fewer than 10 percent of businesses in the United States recycle, according to a report by Recycle Across America.
With so few people recycling at home, it is not surprising that there is not a lot of recycling at school. If there are two recycling bins, one for paper and one for bottles by every trash can, it would be just as easy to recycle as throwing trash away.
Many people think the sorting part of recycling is too confusing, so they just avoid the process altogether. By having recycling bins for paper and bottles, people would know what to put in each bin, causing less confusion. If people knew that recycling reduces the amount of waste sent to landfills and incinerators, preventing pollution by reducing the need to collect new raw materials and reducing greenhouse gas emissions that contribute to global climate change, is more motivation to recycle.