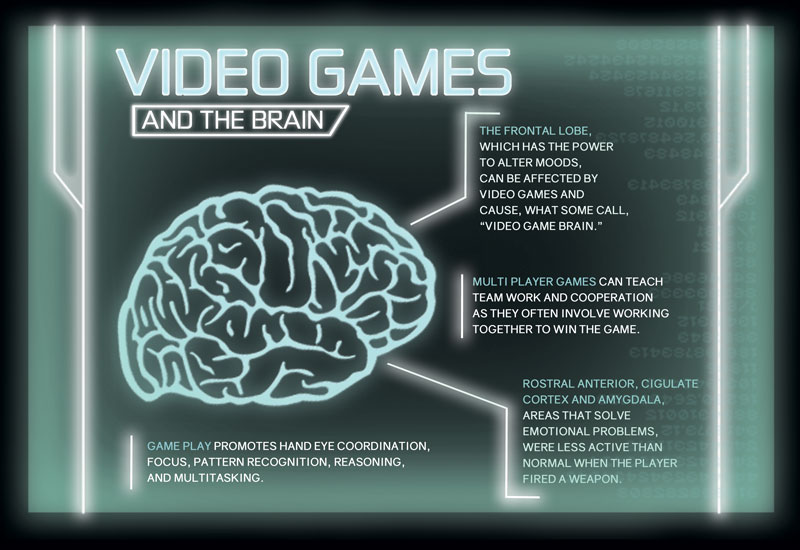 infographic by Neil Cathro; source: news.discovery.com and raisesmartkid.com
[dropcap color=”#” bgcolor=”#” sradius=”0″]A[/dropcap] tall, brawny man in an expensive-looking business suit runs through the streets of Miami, aimlessly shooting and killing anyone who stands in his way. He is on a mission, a mission that has lost its purpose amidst the chaos of the city he ravaged. Firing a quick bullet into a parked taxi driver’s head, the man kicks him out and hops into the cab, tearing through light after red light.
Only this isn’t actually a man, or at least not the felonious criminal pictured in the violent scenario. No, he is merely an animation controlled through a television screen by millions of American teens — 72 percent of all adolescents to be exact, according to a report from the Pew Research Center. From this obsession with video games has stemmed a $70.4 billion dollar industry, as reported by spilgames.com, as well as unnaturally harsh behavioral patterns of players.
Playing violent video games is associated with increased levels of aggressive thoughts and emotions. It can also lead to decreased levels in empathy, even though their relationship to criminal behavior has not been researched as much, said Dr. Nabil El-Ghoroury, an executive director at the American Psychological Association (APA).
“It is likely that those who play violent video games more, may receive a stronger impact, so if a person has been playing such games since they were very young, they would probably have a stronger effect,” El-Ghoroury said. “This would be similar to smoking, in that someone who smokes for a longer period of time is at greater risk than someone who has smoked for a shorter period of time.”
This impact can be hard to grasp, especially since 1.2 billion people worldwide reported to have played video games on a frequent basis in 2013, according to the spilgames.com “State of Online Gaming report”. Also, the same report suggests that video game sales are expected to increase by six percent each year.
Ardent gamer Maria Ramirez, a 2012 alumna, plays every chance she gets — holiday breaks usually work best. Since her free time is usually consumed by studying and homework, she sometimes finds herself in front of her TV screen with controller in hand after a long work shift at Shakespeare’s Pizza. Gaming, in a way, offers an escape from reality.
“I get to be someone else for a while. Anything is possible in a game,” Ramirez said. “There are different worlds, types of creatures and people and histories. If it’s an RPG [Role Playing Game], I can literally create someone from scratch and be whoever I want.”
[quote cite=”Maria Ramirez”]I got so frustrated that I threw my controller across the room and nearly broke it.[/quote] RPGs and fantasy games such as “The Elder Scrolls,” “Dragon Age” and “Mass Effect” are Ramirez’s favorite, but she doesn’t limit herself. The survival horror genre with games like “Bioshock” and “Resident Evil,” and anything from “The Legend of Zelda” series, also appeal to her. Even though Ramirez doesn’t gravitate toward particularly violent games, brutal aspects show up in nearly each one, whether it’s the deliberate slaying of enemies in “Dark Souls” or stomping a mushroom to death in “Mario” games. Dr. Lauren Caldwell-Fasig, who worked with the APA task force on a study of violent media, is all too familiar with these common gaming aspects.
The study’s findings correspond almost directly with El-Ghoroury’s information, except not enough long-term research is available to find out if those who play video games for a longer amount of time experience stronger psychological effects.
“Recent research does suggest that more exposure is related to heightened aggressive behaviors, thoughts and feelings,” Caldwell-Fasig said. “But more research on this question is needed for us to be able to say anything with confidence.”
Although El-Ghoroury confirmed that there is limited data on whether or not violent video games cause long-term psychological damage to players, he explained that violent media of any kind can cause increased negative emotions that can result in aggression.
According to a report from the National Center for Biotechnology Information, however, interactive media can have a greater influence than that of television, which presents a more detached form of exposure, due to the involvement and active processing necessary. El-Ghoroury hopes game ratings are helpful in determining if a game is appropriate for a player.
“Parents should know what their children are playing and for how long,” El-Ghoroury said. “They should also limit the amount of time their children spend playing violent video games.”
For Ramirez, though, becoming desensitized to not only violence but other things, as well, is just a normal part of everyday life. She believes that just seeing something over and over, no matter what it is, will eventually make a person feel detached from it.
That goes for anything, whether it’s violence or a cute kitten. But even if the violent content in a game itself doesn’t irk Ramirez, it still manages to bring out the aggression within her.
“It doesn’t necessarily have to be a violent game to make someone get angry. I speak from personal experience as one day I was playing through a very mild game which I loved but had a knack for spiking tremendously in difficulty. I had been at it forever at this point, fighting the same person. I got so frustrated that I threw my controller across the room and nearly broke it,” Ramirez said. “That being said, that was one of the only times a game had driven me there. Usually, even when something is not going well, you’ll hear me in the room next door yelling stupid things that maybe I shouldn’t mention. But if I pause the game, I’ll be normal.”