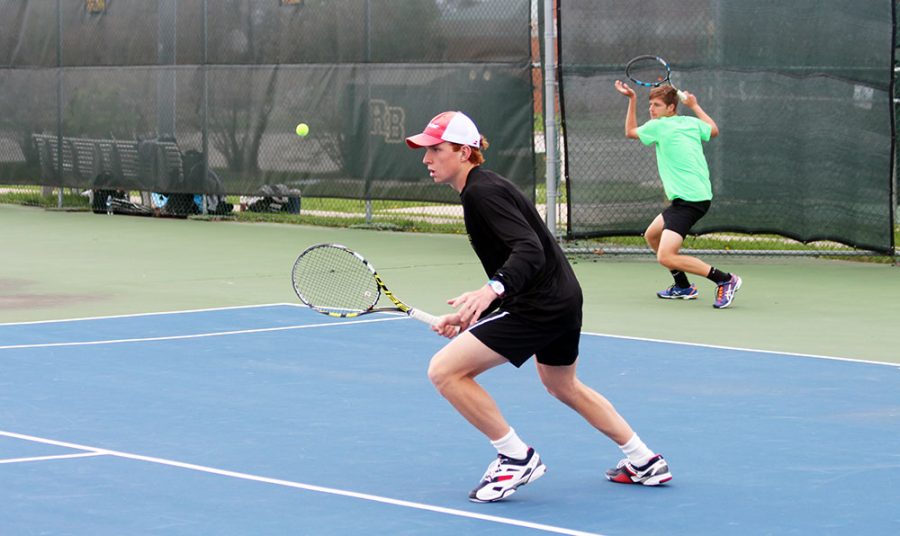 After traveling out of town participate in the Tournament of Champions, the RBHS boys’ tennis team fell just short, placing second overall. RBHS placed sixth place and ninth place in singles, while earning fifth and second place in the doubles category.
The Class 2 Bruins were able to defeat the rival Rockhurst Hawklets for the second place title, while the Mary Institute and Saint Louis Country Day School (MICDS) Rams emerged as the ultimate victors, placing first in all titles.
“I feel like the team played pretty well,” said freshman Kavin Anand, who played in doubles with fellow freshman Zach Grueber. “Rock Bridge ended up getting second place overall, losing to MICDS who got first. We did pretty well in doubles, but our singles could have gone better.”
Although Head Coach Ben Loeb agrees, he acknowledges the team’s overall performance needs slight polishing in order to face tougher opponents in the near future.
“Our archrival had a good tournament without their best player,” Loeb said. “Consequently, we have to keep improving in both singles and doubles if we want to finish on top.”
After returning home, the Bruins are now looking forward to make the most out of the next few weeks of matches, which will include the beginning of the postseason. The next game for RBHS will take place at Bethel Park on Apr. 27 against the Park Hill Troys.
“I, as well as the team, are looking forward to the next month,” Loeb said. “It’s an opportunity to get better and be together. We will need some players to embrace some change and calculated risk-taking with expanding their game. The status quo may not be enough, but we look forward to the journey.“