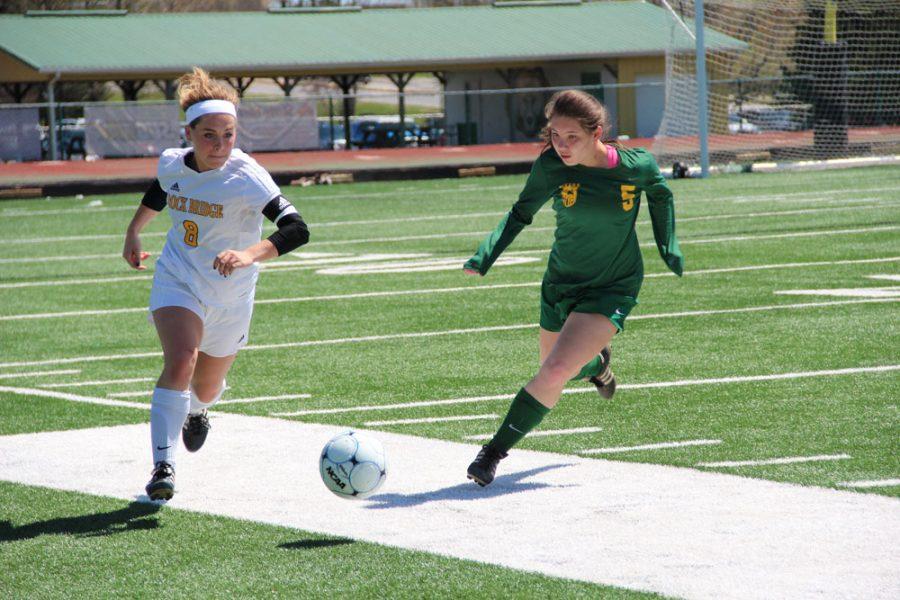 Senior Danni Hrdina (8) rushes to the ball the keep it from Lindbergh control in the first quarter. The game ended as a loss for the Bruins 0-1.
After heading up against Lindbergh, the Lady Bruins soccer team suffered their fourth loss, bringing their season record to 5-4.
With a little under 11 minutes left in the second quarter, Lindbergh scored the first and only goal of the game, putting the ball in the corner of the net. With one win under their belt and only a few minutes left on the clock, Lindbergh went on defense and shutout the Bruins.
“Our work rate right there. As long as we’re working hard, we’re going to keep getting better. When you’re not possessing the ball, you’re chasing the game the whole time,” coach Gary Drewing said. “Our work rate’s there, so we can still play when we’re doing that, but it’s not how we want to play.”
While the Bruins weren’t able to put a ball in the net, senior Danni Hrdina believes there were some successes in the game, such as their strength on the defense for the majority of the game.
“I would say most improved, our defense. We kind of started off a little bit shaky this season and we improved,” Hrdina said. “It sucks that we put that goal in on the silly corner, but I think overall, our defense has just improved a lot and we handled that game well.”
The Bruins’ fall to Lindbergh comes right after a loss to Blue Springs South last night, but they’re planning to regroup and perform against Jefferson City on Tuesday. The skills are there, but the mindset still needs to improve, said senior Cara Wilfong.
“Honestly, some of it is a confidence thing. There are some people on our team who are really good, and I think that some of them may lack a little confidence in some areas, but I think that overall, right now, this isn’t something we need to be worried about and I think we just have to go into Tuesday’s game just kind of ready to play,” Wilfong said. “Honestly right now, I don’t have any concerns and I don’t that we really have any big issues that we have to work on, it’s just kind of a mental thing for us right now.”
The girls’ soccer team may have lost to Lindbergh, but their hopes are still high for the rest of the season.
“We played pretty well most of the game,” Hrdina said. “We let in an unfortunate goal. I think we’re in an okay place right. We’ve just got to get [the ball] in the net.”