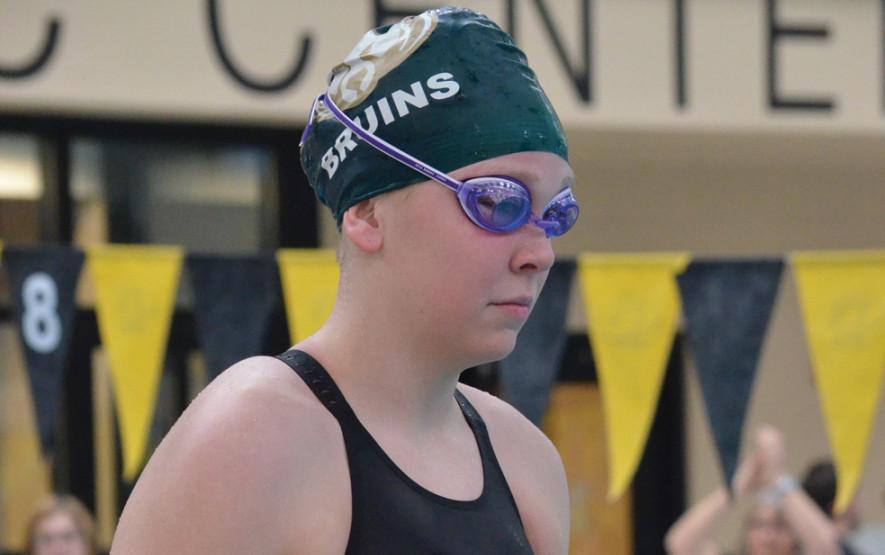 The water lay motionless and peaceful as Anna Willcoxon and her fellow seniors celebrated their final home meet in an RBHS suit at Hickman municipal pool. However, moments later those once still waters were quickly met by the talented Lady Bruin swim team who dominated the annual Last Chance Meet, winning nine of the meet’s eleven events and taking first over fellow Columbia schools Hickman and Battle.
For Willcoxon, the team’s last meet was both an opportunity to take a moment to look back on her career as a Bruin as well as a final tuneup before next weekend’s state tournament.
“I was definitely emotional but I wanted to swim well so I would be confident going into state,” Willcoxon said. “But, I kept a positive fun attitude because it was the last meet and I just wanted to take it all in for one last time.”
Despite being the last chance, hence the meet’s name, to qualify for entry into the state tournament, only sophomore Bettie Logan added another event to her slate in St. Peters after winning the 200 free. However, Logan wasn’t the only individual winner as senior Kelley Tackett picked up wins for the Lady Bruins in both the 50 and 100 breast as well as sophomore Nicole Williams in the 100 fly and junior Ellie Flanagan in the 200 individual medley.
Logan believes the team’s dominance coupled with the intense training regiment of the past four months proved that the squad was reaching peak performance at the perfect time, a mere six days away from a chance to repeat as state champions.
“We have been training so hard these past few months and we are ready to have a great meet next weekend,” Logan said. “This meet put things into perspective that we have a good chance of going for another state title this year.”
And the Lady Bruins’ state title chances will ride heavily on the strength of the squad’s relay teams, consisting of the 200 medley, 200 free and 400 free, all of which taking home wins on Saturday.
“Our relay teams have been a huge part of our success the past couple of years,” Willcoxon said. “Having a varied group of girls who are each very good at different strokes has definitely bolstered us in every tournament we go to.”
With the team’s season full of ups and downs from the self-sanctioned suspensions of swimmers to the firing of head coach Laura Wacker, RBHS finally has their chance to focus on one thing, the state tournament.
“I think we’re all trying to prove that no matter what happens we can always be a strong team,” Logan said, “and swim really fast even with highs and lows during the season.”
Do you think the girls’ swimming team can repeat as state champions? Leave your comment below.