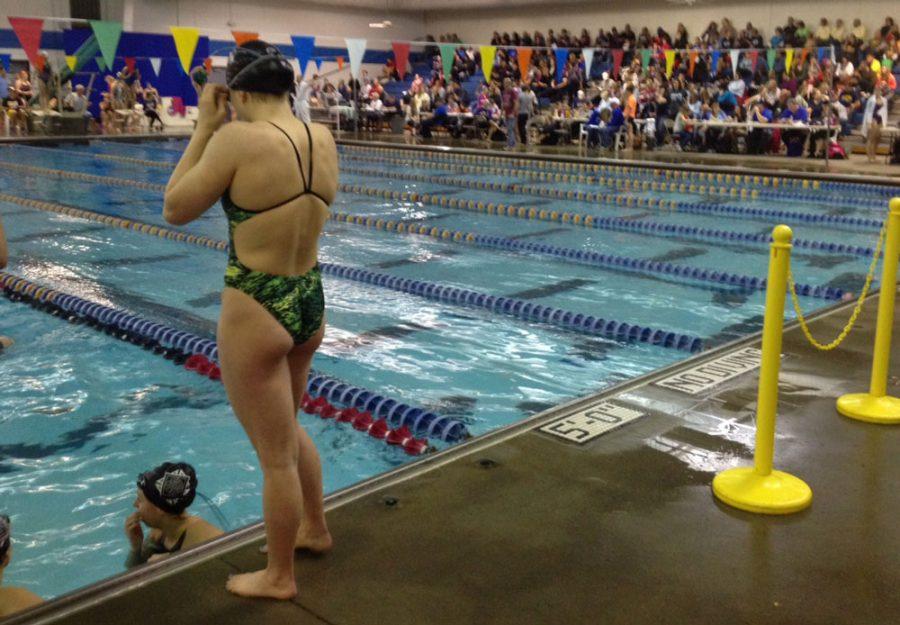 Senior Althea Felton looks to dive into the pool during the Springfield invitational. photo by Skyler Froese

Just a day after the school district fired RBHS, Hickman High School and Battle High School head coach Laura Wacker for comments she made at Friday’s practice, the RBHS girls swim team took third place at the Springfield Invitational, their last away meet before the state competition. The event was newly-appointed head coach Zach Mertens’ first time performing his job duties, a task senior swimmer Kelley Tackett said he did admirably.
“Zach is a great coach and he did a great job running the meet,” Tackett said. “[Wacker] would not have been able to attend the meet regardless, so he was well-prepared to deal with everyone.”
Tackett herself took first place in the 100 meter backstroke, joining sophomore Ellie Zweifel, champion in the 100 meter backstroke, on the winner’s podium. In addition to Tackett and Zweifel’s first place finishes, the 200 meter medley relay team swam placed second with a time of 1:54:91. Mertens said the Springfield Invitational provided a measure of how competition at state might be.
“Being our last meet on the road, it is one of the last gauges that our coaching staff can use to see how training is going and what we still have left to do heading into our end of season meets,” Mertens said. “The competition at Springfield is a collection of teams that we haven’t really faced in invitational competition yet this year. It was good for [RBHS] to swim against teams like last year’s runner up at state, Glendale, and an impressive team fielded by Lafayette.”
With state only several weeks away on February 19 and 20, Tackett and the rest of the team are training to repeat as state champions, with Tackett looking to seize her fourth individual state title.
“Our goal hasn’t changed since the beginning of the season, which is to place 1-2 at state with [RBHs] and Hickman, respectively,” Tackett said. “There’s a lot of determination, now, to be successful and prove that we can get past this week’s events.”
This season-long plan has been marked by tension over several swimmers’ violations of MSHSAA “dead week” rules, a situation that prompted Wacker’s Friday outburst, which compared several swimmers who broke the rules to victims of the Holocaust and others who confronted the former as Nazi sympathizers. Despite the recent turmoil, Tackett remained focused on the team’s game plan for the next few weeks.
“The team recognized that we were in a difficult position, but we agreed to move forward rather than let ourselves dwell on circumstances beyond our control,” Tackett said. “The support of every team member across all three teams has been incredible and we’re keeping our eyes forward. We were determined to give our best performance today, and we haven’t let the recent events affect our ability to train and race as a team.
In the hours following his first competition as head coach, Mertens said he and the team are not wavering from the purpose they have maintained through a most atypical season.
“The team’s plan for state has remained unchanged,” Mertens said. “The next few weeks will be filled with preparing to swim fast.”