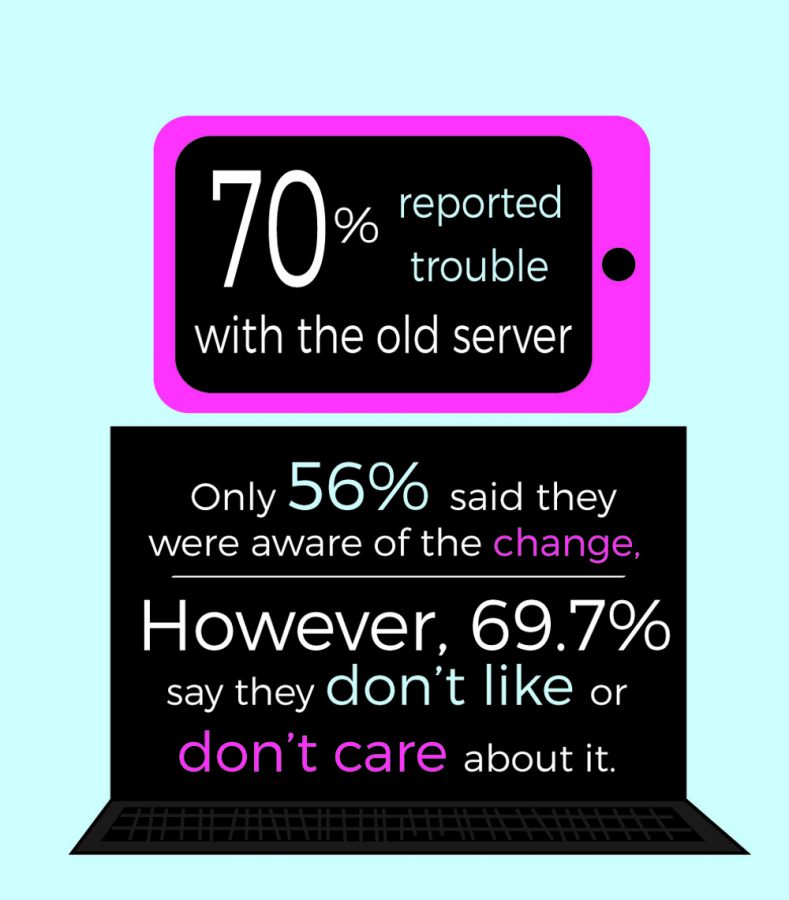 190 RBHS students, representing 10 percent of the school's population, were asked about the old and new district servers.

Columbia Public Schools plan to ring in the new year with a new district server. The change comes as the next step in the lengthy process of  moving URLs in the district away from the long columbia.k12.mo.us to accomdate an updated server with a different company.
The new server requires the retirement of the old WordPress server used within the schools. Content being moved includes CPS TV web videos, as well as some teacher web pages.
“Teachers who still have content on the old web server need to move it off by winter break,” Director of Technology services, Chris Diggs said. “This process has been going on for two years. We really need to cut it off and can no longer wait.”
Some CPS staff, like Digital Media teacher Patrick Sasser, have not faced any large disruptions from the final stages of the server change. Sasser’s class is Cloud based, thus not dependent on a physical location. While Sasser isn’t facing a challenge from the change, he acknowledges its potential effect on others.
“I know there are lots of teachers at RBHS that use shared drives to turn assignments in and to get materials out to students, so teachers who used the shared drives for those types of things would be impacted,” Sasser said. “Students would probably be impacted, too, if they were storing a lot of materials on those drives.”
Diggs said if a student tries to access unmoved content, the links will no longer work. While Senior Molly Sparkes has concerns about accessing the content she needs for her classes, she is more concerned about other students and her lack of information on the issue.
“To be honest I don’t really know what happened,” Sparkes said. “I feel like when stuff like that happens, students should be alerted at the same rates as the teachers, especially since we use the internet as much if not more than the teachers while at school.”
Sparkes’ secondary trepidation toward how well the server will work will be met with SchoolWires, the new server. This off-site company will become the host of the URLs associated with CPS, like each school’s home page. The company also assisted in the recent redesign of these web pages. The district turned to this company when the other server was initially compromised and it will be the newest CPS host.
While the word “compromised” brings to mind more malevolent images, Diggs assured that the change is normal, and the plan to move the content before their old URLs are deleted has been years in the making.
“We regularly retire hardware that is old and unable to run current versions of software,” Diggs said. “This server is part of that rotation to keep our infrastructure up to date.”