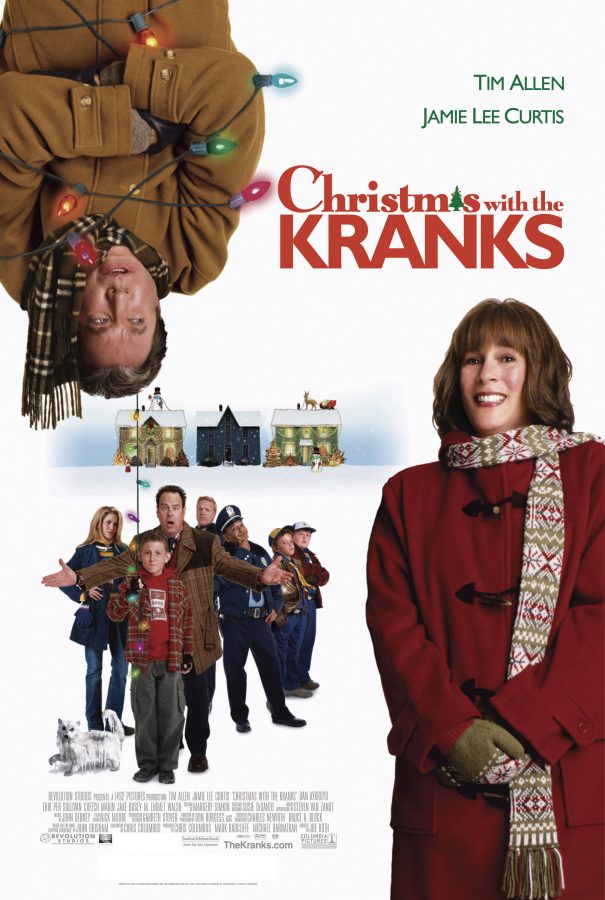 After years of going all out for Christmas, the Kranks are skipping Christmas! That’s right, Luther Krank(Tim Allen) and his wife Nora Krank(Jamie Lee Curtis) are skipping their annual Christmas eve dinner, putting  away their award winning holiday decorations and they aren’t even donating like they do every year.
With their daughter Blair(Julie Gonzolo) out of the country in the peace corps, the Kranks decide to save the $6,000 they usually spend this time of year on a cruise, but when their daughter surprises them on Christmas Eve, they scramble to make it the perfect Christmas she’s been used to.
With Curtis and Allen playing the opposite of each other, you would think this movie would be the ultimate, humorous, Christmas movie, but I was wrong. The amount of sexual jokes was just distasteful for a holiday film.
In one scene where the Kranks are preparing for their vacation by getting a spray tan, you see way too much of them than you ever hoped to see.
Allen in a speedo was not something I expected or ever wanted to see in a Christmas movie.
However, where jokes failed, the directing was a huge success.
Joe Roth’s portrayal of classic Christmas clichés makes you realize  how many of us think of Christmas as a commercial event: spending money on gifts, stressing about holiday cards and Christmas dinners instead of actually thinking of the real meaning behind the holiday.
While this is not the traditional feel good holiday movie, you do realize how much of the holiday season is commercialized.
Along with a friendly holiday reminder, Roth made this movie great by making sure the acting was superb unlike many cheesy holiday comedies.
Even at the start of the movie when they were boycotting Christmas, you really felt like the Kranks hated the holiday and anyone and anything associated with it. But once their daughter returned, they completely switched and acted like nothing ever happened. Besides switching from hatred to love for Christmas, if you didn’t know it, you might even think Allen and Curtis were married in real life. Anyone watching the movie would be able to feel the chemistry between them and the family love they had when their daughter returned for the holidays.
Christmas with the Kranks is not the movie to watch with anyone under the age of thirteen because it can be just extremely awkward when sexual jokes are made, but it is a great movie if you want to be reminded of the true spirit of the holidays: family.