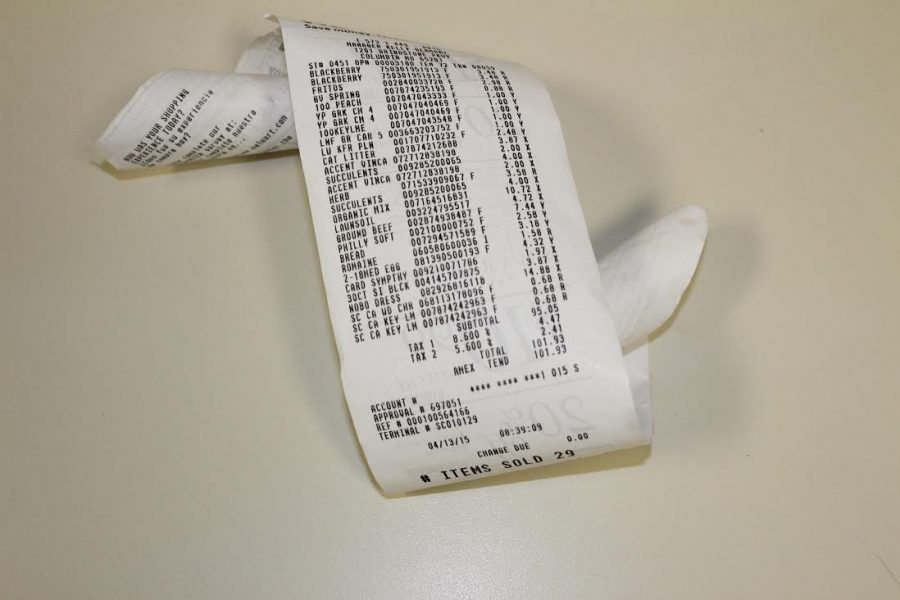 After hours of informative lectures and laborious classwork, many students revitalize by choosing to eat lunch off campus with good company and good food. Upon deciding from the multitude of menus, students are handed an itemized receipt with an order number printed on the bottom, along with a cordial ‘Thank you, come again!’ note.
The food is prepared in a hasty five minutes. Students take a juicy bite out of their handheld sustenance, and in that moment, they are not only increasing their energy level, but also their Bisphenol A (BPA) intake.
This is where the problem arises.
An experiment conducted by Frederick vom Saal, Curators’ Professor of the Division of Biological Sciences and College of Arts & Science at the University of Missouri, showed increased levels of BPA after touching a cash register receipt.
“[As well as being absorbed through the skin], our research found that large amounts of BPA can be transferred to your hands and then to the food you hold and eat,” vom Saal said. “Uses of BPA … in thermal paper pose a threat to human health.”
Dr. Shelley Ehrlich, an assistant professor of biostatistics and epidemiology at the University of Cincinnati College of Medicine, also confirmed vom Saal’s findings.
“[Ingestion] is an additional source of exposure,” Dr. Ehrlich said. “[Ingestion] had not been previously explored and needs to be considered as well.”
RBHS sophomore Allison Foster faces such occurrences daily when purchasing lunch at Panera Bread.
Following Foster’s classic order of macaroni and cheese and cinnamon crumb coffee cake, the Panera cashier hands her a pirouetted receipt. Foster adds two wedges of lemon to her iced tea, using the same fingers upon receiving the receipt.
She takes several sips and waits for her brown bagged lunch.
In a fast food setting, people experience the ingestion of BPA more intense and concentrated than Foster’s. Customers are seen placing a cheeseburger on a nest of receipts, and are further sighted with them clenched in between teeth, attempting to balance a tray full of greasy food.
According to Medical News Today, BPA is an endocrine disruptor, a chemical that imitates the estrogen hormone, which “interferes with the production and secretion of natural hormones.”
Based on the National Toxicology Program’s five-level scale of concern, the effects of BPA are at a midpoint of “some concern” on the harms it has on the brain, prostate gland and behavior in fetuses, infants and children.
Vom Saal correlated the effects of BPA to reproductive and developmental issues in infants and children, while also stimulating cancer, obesity and heart diseases in adults.
“BPA first was developed by a biochemist and tested as an artificial estrogen supplement,” vom Saal said. “As an endocrine disrupting chemical, BPA has been demonstrated to alter signaling mechanisms involving estrogen and other hormones. Store and fast food receipts, airline tickets, ATM receipts and other thermal papers all use massive amounts of BPA on the surface of the paper as a print developer.”
The ever-so-slightly powdery receipt gains its texture from the coating of BPA on thermal paper. BPA helps to develop dyes when heated,   as vom Saal said.
BPA can also be found in common household items such as water bottles, plastic storage containers and internal epoxy resin coatings on aluminum cans.
When it comes to commercial tabulation, receipts are advantageous for keeping in line the purchases that are constantly streaming in. However, by closing time, both ends of the transaction are affected.
Entering orders, swiping cards and handing receipts to ravenous customers is Esperanza Gomez, a junior who works five-hour shifts each weekday as cashier at the new Pancheros Mexican Grill location off of East Broadway.
Luckily for Gomez, Pancheros has adopted new requirements for when to print and give out receipts. Because of this, Gomez is in a less susceptible situation.
“The new [Pancheros] has a system: you swipe the customer’s card and a receipt will only print out when it is over $25 or when they ask for a copy,” Gomez said. “I usually come into contact with them [receipts] about 10 times a day, and that’s it. People don’t really ask for their receipts because they get a burrito and a soda, and they know how much they are supposed to be charged.”
A solution for decreasing BPA intake includes wearing protective gloves to block the porous skin from absorption, as well as washing hands after handling thermal receipts, Ehrlich said. The increasing usage of digital receipts is also a solution that benefits both the health of the customer and environment.
“Because no safe alternatives to the use of BPA … in thermal paper have been identified, our findings provide support for the EPA’s (Environmental Protection Agency) recommendation that thermal paper should be replaced with other safer technologies,” vom Saal writes in his BPA research publication. “This should be taken into consideration in risk assessments and should be a priority for future research.”
By Joy Park
photo by Cassi Viox