Bruins come out winless in doubleheader against CBC 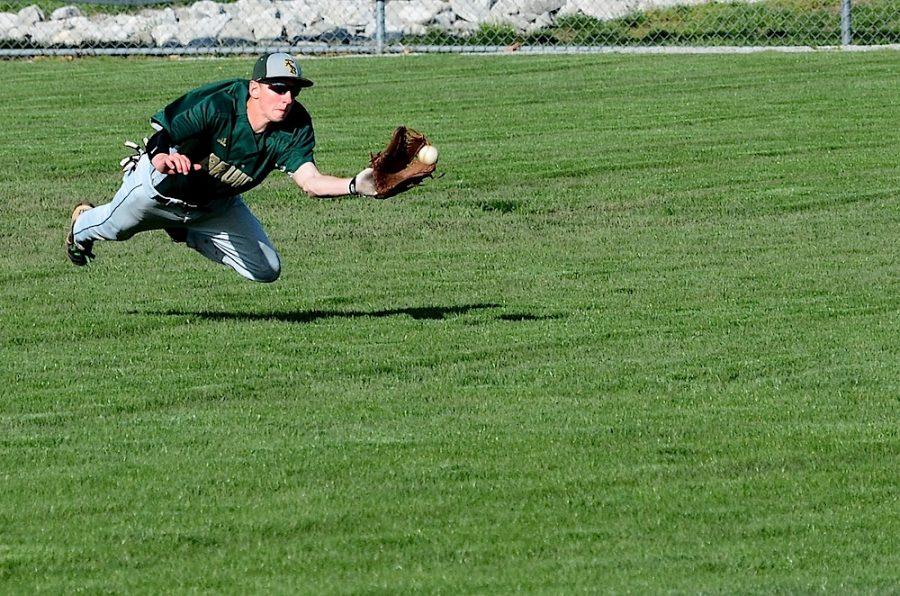 Even though the RBHS baseball team lost both matches in the doubleheader against CBC, the two games were vastly different tales. The Bruins played two games in the span of five hours against CBC and lost the first one 6-2 and the second one 4-3. Sophomore Nick Wohlbold was on the mound for RBHS in the first game and after a solid first two innings from him, things went downwards.
“I wasn’t very happy with myself,” Wohlbold said. “I didn’t command my pitches very well, so definitely need to work on that some more.”
The third inning inning consisted of a myriad of hits from the Cadets but only one run. The fourth inning started off with a solo blast to right field and that’s when the CBC bats came alive. From 6 hits, CBC brought in four more runs in the fourth to extend the lead to 6. Senior Logan Twehous said the team lacked energy out on the field.
“We didn’t come out energized and didn’t do the little things that help you win a ballgame,” Twehous said. “Small mistakes can change a baseball game and that was the story of the first game.”
The Bruins were able to get a rally going on in the last inning batting in two runs but it wasn’t enough to change the result. The team had a long talk before the start of the second game.
“We talked about what we need to do in order to win the next game,” Twehous said. “We talked about having better at bats and just playing with more spirit.”
The contrast in energy levels between the first and second game could be seen during the first at bat of the Bruins inning. Senior Connor Brumfield fought off 12 pitches before singling down the middle of the field. Then, the Mizzou commit drove in a run on the top of the third on a fielder’s choice and also came in to score on a RBI single by Cole Evans. The Cadets answered strongly right away after hitting a two-run home run of off Avery Jennings to tie things up. CBC ended up talking a lead in the next inning before Cole Evans drove in his second run of the night on deep double down right field. However, CBC added another run in the bottom of the fifth and that was ultimately the winning run of the game as the Bruins lost a tough one 4-3.
“CBC is a good team, but the whole team knows we certainly didn’t play our best,” Evans said. “In the second game, we competed out there better.”
RBHS plays its next game on Tuesday against Fatima. Twehous said the team is eager to play better in the future.
“We want to get out on the field and play again,” Twehous said. “We aren’t used to losing like that so we just want to get back out on the field and get the taste out of our mouths.”
By Harsh Singh