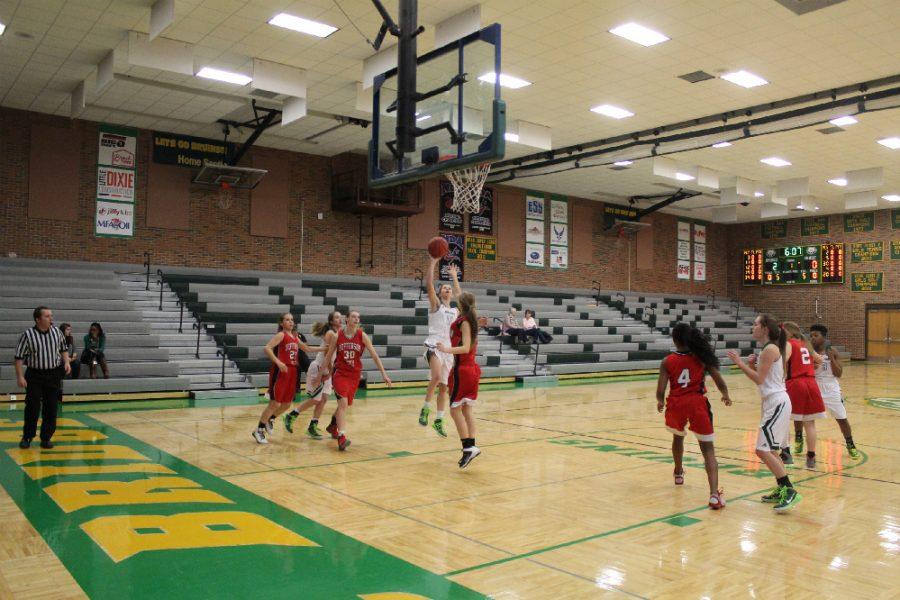 The 2015 senior class in girls basketball had a significant effect on the Bruin’s three consecutive state championship titles. This Thursday was the last time seniors Cierra Porter, Sophie Cunningham, Kelsey Knorr and Carly Offerdahl were going to step on court for a regular season game marking their senior night. RBHS played Crane High School, the top-ranked team in Class 2,  in what turned out to be a heartbreaking 58-53 loss.
“Today we just weren’t as focused as we needed to be,” Offerdahl said. “We just let one bad thing lead to another instead of flushing it and moving on.”
The Bruins were leading CHS with four minutes remaining, however crucial mistakes toward the end of the game opened up the opponent’s scoring. Cunningham said the team didn’t make smart passes and failed to rebound the ball at key moments. She said a loss like this can ultimately help the team.
“Hopefully it makes us work harder,” Cunningham said. “Soon, when districts start we won’t have another chance to fix it.”
With the playoffs imminent, the players know they have to get back to the practicing right away.
“We just need to practice and pick up the intensity,” Offerdahl said. “We talked about how it all starts in practice.”
While the loss hurts the team, Cunningham said it’s bittersweet reminiscing all the memories she has made at RBHS. The loss drops this year’s seniors to 95-18 in their careers.. Offerdahl, agreeing with Cunningham, said the loss can instigate the team to newer levels.
“Obviously, this isn’t how we wanted to go out in our last home game but this is going to get a fire burning in us, and we won’t let this happen again,” Offerdahl said. “We will fight and work hard to reach our goals.”
Coach Jill Nagel said the next few practices will be in focus of offensive execution and defensive solidarity. She said the loss is one thing but knowing this is the last home game of the 2015 senior class is another.
“The senior class has been phenomenal and like classes before them have continued to lay another great layer to our program’s foundation” Nagel said. “I am very proud of each of them for what they do on and off the court for their school.”
By Harsh Singh