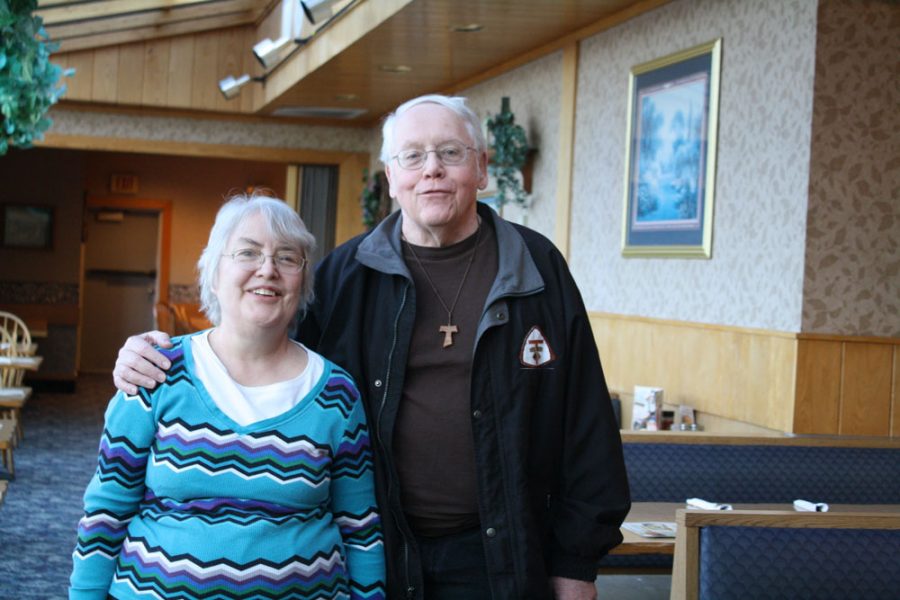 A love story like no other
Walking down the hallway and past brightly colored posters that adorn the walls, Irene Livingston makes her way into her classroom. Along with the bubbly conversations and lighthearted laughter that fills the halls of Greenwood Laboratory high school, came the highly anticipated yet dreaded event: prom.
“I was in high school and hadn’t dated that much and prom was coming up. I was going to a small school in Springfield, Missouri, so the choices within the school weren’t great,” Irene Livingston said. “It was sort of like nobody dated their classmates because [we were so much] like family. I had come later, but most [students] had been together in class since kindergarten.”
Spotting her friends entering the room, gossiping about who they’ll go to prom with, they rush over to her saying, “Don’t worry, we’ll find you someone.” The result was a few double dates where she met Ken Livingston, a young 18 year old college student who was just starting off his freshman year at Missouri State University. A close friend of his was dating a good friend of Irene’s, so he agreed to go on the date. There, Ken and Irene Livingston got to know each other, but it was not the typical over the dinner table discussion.
“[The other boy on the double date] wanted to take his girlfriend home without us just sitting there in the car,” Irene Livingston said. “It was not very romantic for him to have this double dating thing but at some point he [needed to spend some time with his girlfriend] so he ended up dropping Ken off at my house with me and said he’d come back, but then it took him a very long time to come back.”
At Irene Livingston’s house, Ken Livingston met her family, getting to know the traditions and dynamic of how the Minnesota based family lived.
“I got to meet her family, I learned to drink coffee and I had never drank coffee in my life,” Ken Livingson said. “They drank so much coffee, they had those big huge pots, one they would drink it out of and another one they would brew it so it would be ready. I drank three cups of coffee.”

“I think that’s a powerful thing in any relationship to have appreciation and think about the other person.”—Irene Livingston

The couple continued dating even through transitional times in their lives when Ken Livingston finished his university education and got a job, and Irene Livingston graduated from college. Despite all of these changes occurring, their relationship was strong, and with both of them falling head over heels for each other, they soon got married at the ages of 20 and 22.
“In those days that didn’t seem young, but now people wait longer. People feel they need to start their careers [earlier] now,” Irene Livingston said. “It was very normal for people to be married and finishing their undergraduate degree in those days.”
After they said their vows and church bells carried them off into their honeymoon, they soon had seven years of marriage under their belts. Before long, the excitement of new marriage began to form not in just their day to day lives spent together, but in the activities they did. They were heavily involved in the ministries of their Catholic church and attended services often, soon finding out about a marriage enrichment program called World Wide Marriage Encounter (WWME).
“It was a weekend program and so [you] go Friday night and your finished on Sunday,” Irene Livingston said. “It was just sort of like we didn’t have a lot of knowledge of what it was, just, “Oh it’ll be wonderful, you’ll love it. It’ll make you closer.” And that was about all they told us.”
The program taught couples about how to communicate and deal with daily problems that they may encounter, but one of the most unique parts about it was the concept of dialoging, meaning a couple shares their feelings with one another through a hand written love letter. Unlike other marriage programs, WWME encouraged the couple to write the letters to each other every day, each one ending in written prayer. Despite the letters being written in the form of a love letter, Irene Livingston believes the letters are simply each spouse telling the other how they feel.
“[On the weekend program] they went into details about [dialoging]. You need to focus on your feelings, and you need to communicate with each other and don’t fill it full of griping and things like that,” Irene Livingston said. “So, call it a love letter; it’s probably more of just a letter of me telling him where I am and what I’m feeling that day.”
Ken and Irene Livingston both believe that dialoging helps keep their relationship strong and healthy, and is part of the reason they have been able to live happily together for 43 years. Their relationship is even more impressive when considering that between 40-50 percent of American marriages result in divorce, according to an article from Marriage and Families. Irene Livingston said the letters give them time to think about their day and also reflect on the state of their relationship.
“At least if you take a few minutes, write, fill up one page with just where you are right now and how you’re feeling, how you experienced a situation, along with the appreciation and the prayer, I think we understand each other maybe a little better than people who don’t do that,” Irene Livingston said. “I think that’s a powerful thing in any relationship to have appreciation and think about the other person. You can come to an understanding and maybe realize that our feelings are totally different but understand the other one’s feelings anyway, that’s something that comes from the love letters.”
While settling in to write, Irene Livingston finds her comfortable chair, while Ken Livingston lays on the bed or couch. They write for about ten minutes, and once they are done writing, they join together and exchange letters. He said they read it twice, “once for our head, and once for our heart,” allowing them to think about what the other person is saying and truly understand each other. After reading it through, they discuss how they felt about what their spouse wrote and learning to deal with any problems or disagreements.
For the past 43 years that they have been married, they have not missed a single day of dialoging, and have written more than 13,000 love letters to each other. Ken Livingston said the key is to make time to write the letters instead of trying to search for it in their schedule. In addition to effectively sharing their feelings, the letters have helped them stay together for so long because it nurtures the connection between them.
“[The letters] keep us focused on our relationship. For a lot of couples, if you’re not doing something it’s real easy to drift apart. I get involved in my life and she gets involved in her life and maybe the only time we see each other is when we go to bed at night to sleep. This way we make time,” Ken Livingston said. “[Somebody once said] “You don’t find time. When was the last time you were walking along the street and you found an hour lying under a bush?” You don’t find time, you make it. It’s a matter of what’s a priority, and your relationship is a priority, and one way we keep it strong is by doing that.”
By Grace Vance
Photo by Grace Vance