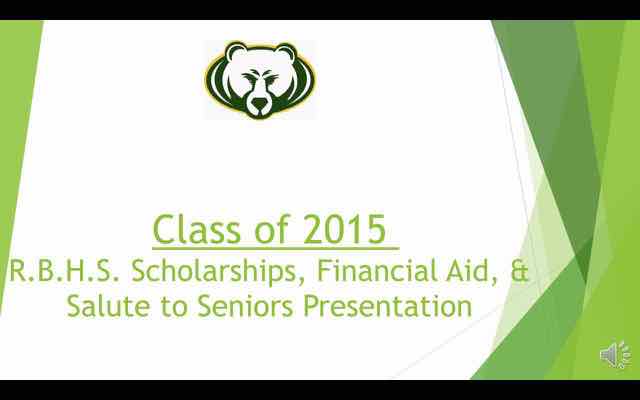 With graduation less than a semester away, the time of year for senior scholarships has arrived. Seniors can find the Salute to Seniors Community Scholarship booklet on the Guidance website, where they can find over 30 scholarships in the booklet along with additional opportunities posted on the scholarship pages. Seniors must turn in scholarship applications to the guidance office by 4:05 p.m. on Tuesday, Feb. 17.
For Hannah Cajandig, alumna 2014, receiving scholarship at the ceremony almost a year ago has paid off doubly.
“I got the Alpha Kappa Delta educational scholarship for $500,” Cajandig said. “That was the only one I got. That paid for my textbooks this semester and last semester. I am at Mizzou on a lot of financial and lots of scholarships, and even a little bit like that makes such a difference.”
Cajandig currently works two jobs to help pay for her room and board, tuition and other fees. According to admissions.missouri.edu, the current estimated in-state cost of attendance for general degrees $24,704, which is barely $5,000 less than the national average of $30,094, according to College Board. The steep price of higher education goes up every year, guidance counselro Leslie Kersha said, and every penny is important, even if it’s only $500.
“It keeps a student from having to take out school loans or …  helps them not take out as much for school loans,” Kersha said. “I think um if a student spends two hours filling out an application for a scholarship for $500 and they get it, that’s $250 an hour. That’s a lot of money even though a $500 scholarship might not seem like a lot when you’re looking at thousands of dollars, it’s still per hour a lot of money.”
Kersha said while some applications do require additional material, the applications are mostly self explanatory. However, even though the applications are simple, she said in the end only four or five students apply to certain scholarships, while with a senior class size of over 450 no scholarship should have so few applicants, especially with the better chances of earning a Salute to Seniors scholarship.
“ I think the biggest, the best thing about it is that they’re scholarships specifically for our students, so … each student has a better chance of getting a scholarship,” Kersha said. “When you apply for a scholarship that’s a nationwide scholarship the applicant pool could be huge, so your likelihood of getting a scholarship is way less than if you just competing with your senior class.”
With such an easy opportunity to try and earn money for college, she said she hopes more students apply this year. Earlier in January, Kersha met with all seniors’ classes to present about scholarships and financial aid to help inform students about Salute to Seniors. Senior Rachel Cullen found this seminar helpful because she wouldn’t have known about the packet otherwise.
Cullen will attend University of Missouri: Kansas City in the fall next year. Within the University of Missouri System, she receives half off of tuition because her dad is an employee; however, she will get no deductions on room and board, according to University of Missouri Student Financial Aid.
“I printed out the little booklet and there’s a few of them that I qualify for um that I’m going to, planning to apply to,” Cullen said. “I know a lot of the little scholarships add up, like the one for Paxton Keeley. It’s only $250 but if you get that plus a $500 one and a $1000 one, you’re already – that’s like half of my money to go to college.”
After guidance sends applications to the community organizations, Kersha said recipient decisions should be made by April 1 so guidance can send invitations to students for the Salute to Seniors ceremony on Wed. may 13 at 6:30 in the main gym. Seniors should receive an invitation the week of May 4, but all seniors should look outside guidance and activities to see if their student number is on the invitation list.
“Last year we started posting a list of invites by student number because some kids … didn’t get the invite that they were supposed to be there,” Kersha said. “It’s also really important if kids can’t make it that they let me know because we definitely don’t want someone getting up to present an award and then that student isn’t there. … We need to let the community member know ‘Hey, your recipient’s not here tonight.’ so they don’t get up there and try to present an award to a student shows not there.”
In addition to the scholarships, academic achievement awards are given out at Salute to Seniors as well, Kersha said, and guidance always ends up inviting around 100 to 250 students. She said it’s just a fun and positive way to recognize the seniors for the hard work they’ve done. Cajandig, who had won a scholarship before, said hearing her name called highlighted her night.
“It was formal attire, so I got my little dress on I sat in the front row because it was alphabetized, Cajandig said. “It was kind of long, I know that sounds bad, but it was also exciting because it was the end of the year, I’m getting to see all these people I’ve gone to school with, and it was really exciting.”
By Emily Franke