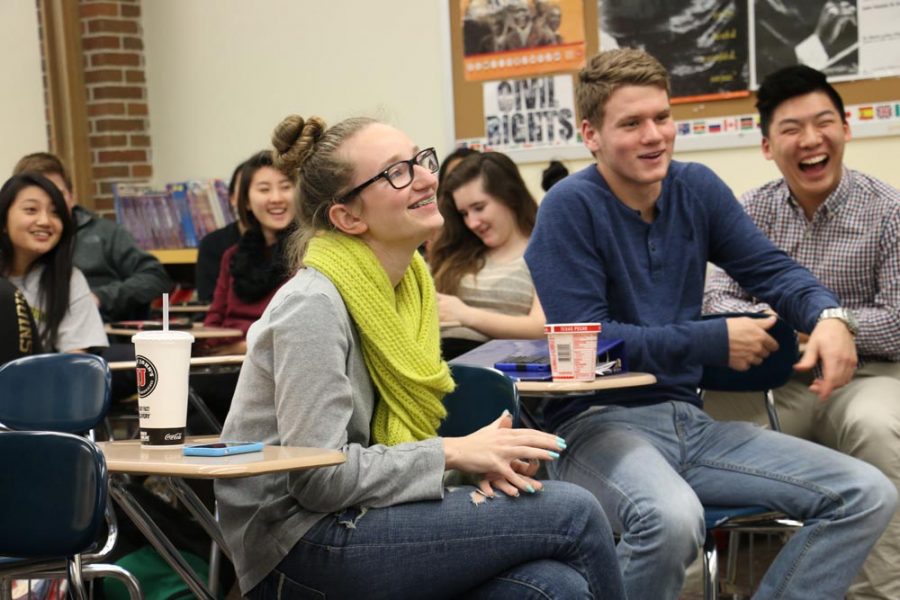 Motion to laugh: Juniors Sydney Tyler and Stephen Sowers chuckle at Model UN. Model UN is an activity where students represent countries in simulations of the United Nations and other diplomatic affairs.

A handful of red-faced, tired looking students enter the building at 6:15 p.m. on a dark Tuesday.
They amble towards a certain social studies room, one that AP United States History teacher Chris Fischer is already in, waiting for this dedicated, frozen group to enter.

As the Model United Nations practice begins, students slowly wake up after a goofy University of Missouri student with a mop of red hair — a former Model UN participant — hits them with a steady line of jokes.

One girl is particularly engaged, particularly funny. This participant is junior Sydney Tyler. Upon hearing anything comical, Tyler is ready to lob a witty comment right back.

This is Tyler’s second year in Model UN, and she has grown to love this world of research, drafting resolutions, delivering extemporaneous speeches and constructing position papers.

“As a sophomore, [last year] it was my first year at Rock Bridge, and I was really trying to find a place where I fit in. Last year, there were a lot of really strong seniors in Model UN and I was friends with a couple of them and they were like ‘You should really try this,’” Tyler said. “They made it sound like a lot of fun and they said you got to go to Washington D.C. So I decided to give it a shot and I really enjoyed it. I decided to do it again this year.”

As all new delegates do, Tyler started Model UN in a big committee with a partner to lean on. As a sophomore with no experience in this kind of political role-playing, she had no idea that she was about to be in the eye of a tornado when she arrived in Washington D.C.

“I was surprised by how intense it was. I remember sitting there in the conference like ‘This must be what it’s like going to work every day.’ But in a good way, you are always working. It’s nonstop,” Tyler said. “I was in a larger conference last year. There were so many people when you are trying to get a resolution done and it was a lot of outside work because that was when you could really have that one-on-one interaction with other people.”

Sydney proved herself as a valuable player, earning an honorable mention in a room of more than 50 delegations.

“Sydney did have success early on, which is really rare. The fact that she won an award as a rookie is really unprecedented. I think she knows what she has to do and it gives her a little bit more direction,” Fischer said. “She understands that you have to put all the time into it outside of the classroom and outside of the delegation, and she is willing to do it.”

“With my committee this year, it’s just going to be 19 or 20 really strong people who are really set. We are given a person and you have to stick with your person,” Tyler said. “It is going to be people who have very little wiggle room. It might just be everyone in deadlock for the entire conference. It will be interesting to see how it works out.”

Tyler’s teammates have confidence in her ability to succeed in this cutthroat environment though. Her natural qualities and personality allow her to stand out on a team filled with intelligent students.

“Sydney is obviously a very smart girl and that combined with the fact that she is a good kind of stubborn and she likes to debate and analyze things, makes her a better delegate,” Model UN member junior Stephen Sowers said.

Fischer agrees with Sowers. He sees Tyler’s superior people skills and other traits as qualities that give her a higher platform than many of her competitors.

“She is a really effective communicator, probably more so than she really knows. She has the ability to listen to someone, really sincerely listen,” Fischer said. “She cares about people and that really comes out in her ability to build coalitions and get people to buy into what she is saying.because she is engaged. She is not assuming and she’s humble. She is also a really good public speaker, as she is confident.”

But her natural talent isn’t the only thing that makes her stand out. Tyler’s preparedness and hard work truly set her apart, Sowers said.

“That is a given [Tyler puts in more work],” Sowers said. “If you want to be good at it, you have to put in more work than other people.”

Fischer believes her passion is what drives her to concentrate and devote so much time to Model UN.

“Sydney works really hard. She’s diligent. It means something to her, so maybe that equates to the time she puts into it. She has an amazing work ethic. To be competitive it really takes multiple years, especially the way we do it at Rock Bridge, because it’s not a class and at the the schools we compete against it is,” Fischer said. “For us it’s extracurricular, so we have to try to fit it into our busy schedules. All the kids I’ve got are in AP and in show choir and sports, so they do everything under the sun. It makes it difficult. But you have to start early and be patient.”

So just how much research does Tyler put in? When the conference is all over, she will have spent about 25 cumulative hours reading about her character and solidifying her historical knowledge regarding her committee.

“We don’t get our topics until December or January. So until then we just have an hour and half practice once a week. But now that we’ve got our topics we are doing two practices a week, on Tuesday after school and then on Sunday, which is a longer one, for two or two and half hours. But that’s just preparing to go to the conference,” Tyler said. “All the research has to be done at home. I’d say I’ve put in about five hours of research so far and I really should have a lot more. Within the next three weeks I’ll put in another 15 or 20 hours of research.”

Tyler hopes that all of this work will pay off. At this year’s conference, she wants to compete to the best of her abilities and bring home another award.

“Obviously if you put in all this work, and I will be putting in a lot of work, you want to get results. It’s also nice to come home and say I earned that and I did my best and I did better than other people,” Tyler said. “You don’t want to say you want to win, but I do. I want to prove myself to myself. It’s nice to win.”