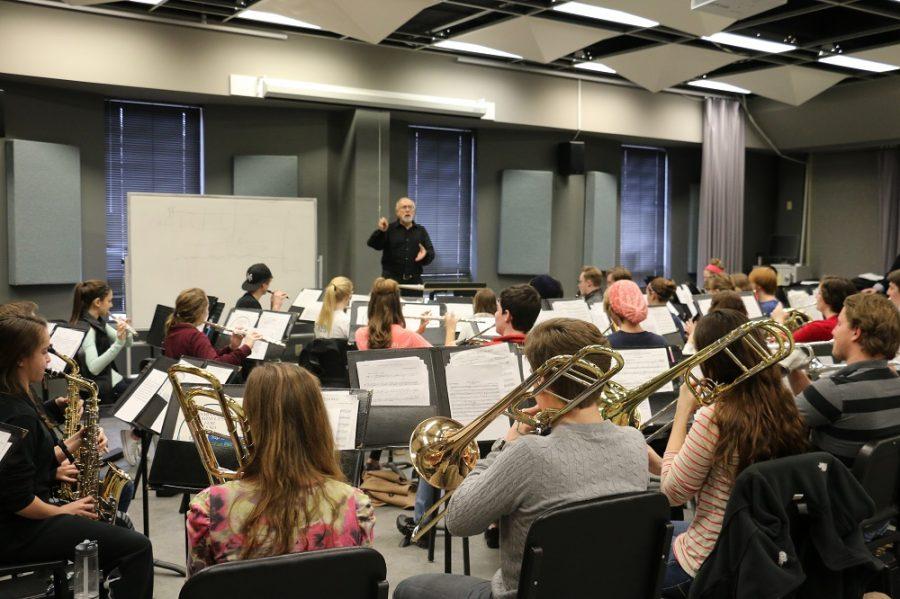 Clinician adds color to Wind Ensemble’s MMEA program
On Friday before school, members of the Wind Ensemble walked into the band room for a before school rehearsal and greeted an energetic stranger, their clinician Dr. Edward Harris, Director of the School of Music and Dance and the Director of Bands at San José State in Sat Jose, Calif.
“His energy [is] very cool. It’s also very cool to see a humanistic perspective,” assistant band director Patrick Sullivan said. “There’s always some sort of emotion that he’s trying to pull out of you, some sort of attitude, some sort of thing that we as practical band directors sometimes skip over because we’re worried about notes and rhythms and intonation and all those key components of music that we forget about some of that stuff.”
For the next three hours, and another six hours after school and on the weekend, Dr. Harris worked with the band to help take their Missouri Music Educators Association program to the next level. The wind Ensemble performs at the MMEA state convention next week.
“I think bands, when they play at competition, work really hard developing the music and you’ve got difficult music but once you have the notes, once you have the rhythms down, then you’ve got to pull the essence out,” Dr. Harris said. “Basically what I’m emphasizing is musicality, the storyline of what we’re doing, the emotion of what we’re doing, not necessarily the technique in it.”
While the technique is in the learning process, Dr. Harris said, the interpretation of the music is in the creative process. Throughout rehearsals, he worked with the musicians to help them read and play the music beyond what was printed on the page by bringing freshness, vitality and sparkle to their playing.
“There’s certain intuitive things that we do as musicians … You understand there’s a shape to the line [of music],” Dr. Harris said. “A lot of times [bands]  will just ignore it and they could potentially have great musicality, but it never allows them to show that quality, so what I really want to do is show [the band] a different aspect of the nonverbal science of playing the [music].”
For sophomore saxophonist Cole Walker, hearing thoughts from a different mind was refreshing, and Walker said the whole band seemed to be more excited about the music.
“I liked in the ballad when he talked about putting your own mental image about something that has happened in our lives and try to convey that in the music,” Walker said. “This week I want to work on adding some more style to some pieces and making it more interesting. Finger and note-wise, I’m there now. It’s just adding my own touch on it.”
After working with the ensemble on Saturday, Dr. Harris said the vitality of the players and the level of musicianship were strong points in the ensemble. Areas the band could improve on, however, included expanding the musicianship by showing more color in the playing.
“The first day, again, a wild crazy person comes in and asks you to do something that’s unusual, [then] today we understood one another when we stretched things or we put long dynamic lines, [the band] knew exactly what I was looking for,” Dr. Harris said. The band “wanted to play well, [they] wanted to play precisely and you didn’t want to upset anything, but what I want you to do now is to take a chance, step across the line and start to do things that aren’t required.”
Dr. Harris said the band played beautifully and musically, and when their own band directors reclaimed the podium, they played with a much more crisp response. Sullivan said he believes the changes Dr. Harris made will stick with the band.
“To have someone come in with a fresh perspective is very good because if we just stand in front of [the band] and keep saying the same stuff, [they’re] not going to get much improvement or to that next level,” Sullivan said. “There’s still intonation things, there’s still some balance thing and a few a little parts that need to come out. There’s one fix we need to do with melody in one situation, but there when we talk about things like that in the process we’re happy to be able to talk about very small minute changes not major changes and I think both Mr. Mathews and I feel that way about all of the pieces.”
By Emily Franke