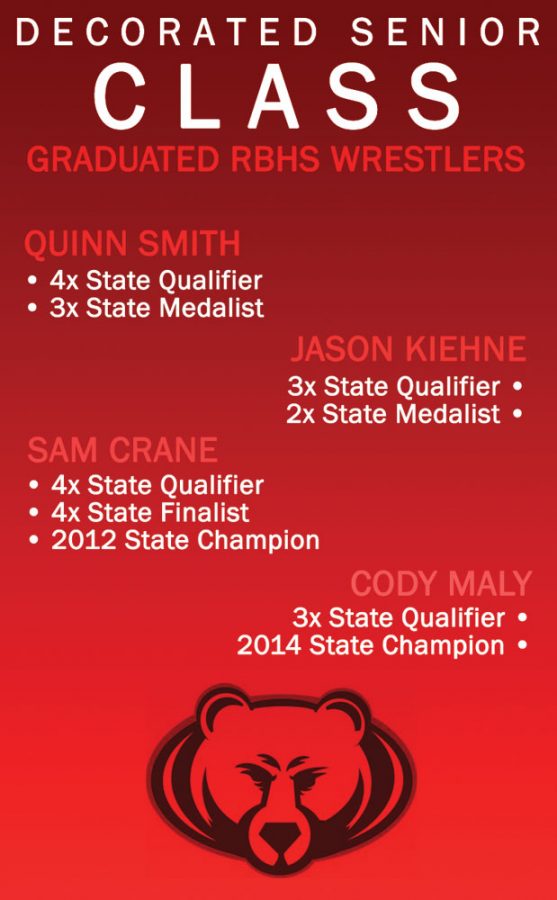 Last weekend, in the Parkway South Patriot Classic, a dual style tournament with teams divided into two pools and then the best wrestlers from each side wrestle for individual titles, the Bruins had their first chance to see how they would fare as a team without those four seniors who had previously been the hallmark of the program. Propelled by individual titles from sophomore Brock Davis  at 106 pounds, junior Josiah Kline  at 120 pounds and senior Graham Ratermann  at 170 pounds, the Bruins surged late to slide into fifth place in the team standings.
“With the amount of seniors we lost last year I’d say that’s where we need to set our goal for now,” Davis said. “And we can work our way up from there as we develop in the practice room.”
Davis opened the tournament finals with a 9-1 major decision over Francis Howell’s Tyler Kreith after running through his pool matches. Davis said that practicing with better wrestlers and with his coaches helped him prepare for this tournament.
“I wrestled best on my feet and listened to my coaches when they saw something I could improve on,” Davis said. “I could really use some work on getting mentally prepared, but so could a lot of us.”
Kline defeated three other people, using the techniques that he practiced with his teammates. At 126 pounds Kline, a returning state champion, performed at par and won a 14-5 major decision in the finals and he defeated Jackson’s Jake Byrd, a state qualifier last year, 4-2 in pool play.
“[I did well] sticking with my gameplay and trying to mentally break my opponent,” Kline said. “[I] stay on the offense, control every position and keep the match moving.”
Ratermann recorded his fourth fall in the finals at 170 pounds against Lindbergh High School junior Sam Schuster. For the other Bruin wrestlers things were a little tougher as the less experienced wrestlers got their first taste of varsity competition.  “A lot of us have been mentally psyching ourselves out when we see the person or team that we have to wrestle,” Davis said. “And that’s something that we all need to work on. We’ll take the mistakes we made this weekend and work on it in the practice room.”
The Bruins’ next test comes this weekend in Jefferson City at the annual Missouri Duals hosted by the Helias Crusaders. The Missouri Duals are similar to the Patriot Classic as teams are divided into two pool but instead of an individual championship there is a team championship with the best teams from each pool wrestling each other for first place and the the second best wrestling for third and so on. Traditionally the Bruins have –been in the same pool as host Helias and district foe Waynesville.
“There will be some tougher teams there so I doubt that we will do better than this weekend as a team,” Davis said. “But if we keep working hard anything is possible.”
By Derek Wang
infographic by Maddy Mueller
Have you been to a wrestling match this year?