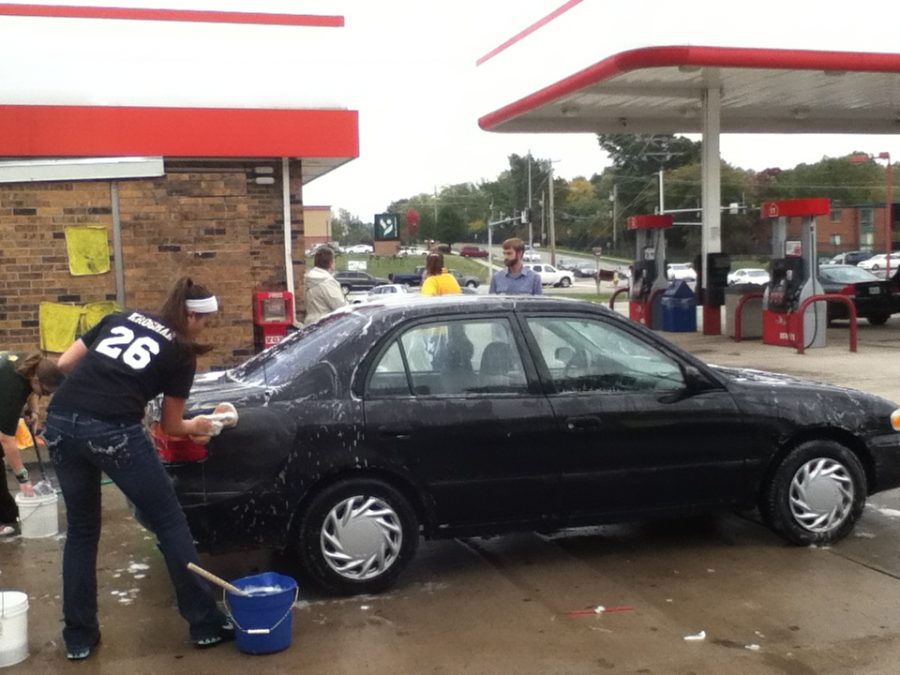 Junior Hannah Krogman washes RBHS Gifted Coordinator Jake Giessman's car. The money raised from the car wash goes toward students' trip to Hawaii with the band over spring break for a competition there. Photo by Alyssa Sykuta.

Some band members spent their Saturday morning washing cars today, Oct. 13,  from 9 a.m. to 1 p.m. at the Break Time at the corner of Stadium Blvd. and Ash Street, hoping to put a dent in the cost of their competition in Hawaii this coming spring break.


Band moms Kay Cook and Julia Smith organized the event, intending to get students involved in working for their trip.
“We’ve seen a lot of  car washes here, so  we knew that they were open to having groups come over here,” Cook said while supervising several students with soapy sponges in hand. “So Julia [Smith] called the manager of Break Time and set it up, and then we put out the plea to sign up the kids. We printed up tickets and pre-sold tickets and then we just all showed up today and prayed for sunshine.”
Though the sunshine wasn’t present, the rain held out as gray skies moved in and the car wash still received plenty of business. RBHS Gifted Coordinator Jake Giessman said the band students did a great job of spreading the word about their event and, standing by his car watching the students rinse and dry the vehicle, he joked that it was the best car wash he’d ever had.
Sophomore “Juan Chacon wouldn’t stop pestering me until I bought a ticket,” Giessman said, laughing. “This is probably the cleanest my car will be all year because I don’t wash it ever.”
For hours , students  danced around with signs on the side of Stadium Boulevard advertising their event. However, massive cardboard signs weren’t the only form of promotion present for the car wash. Seniors Grant Flakne and Brian Cook hauled two guitars and a string bass out to a median in the road and used their musical skills to draw oncoming traffic to their fundraiser. Not wanting to wash cars but needing to make money for the vacation he must pay for on his own, Grant Flakne was quick to grab his bass and sign up to play music on the roadside. However, for Brian Cook the guitar in hand meant a bit more.
“I am doing this, one, because I love to play music,” Brian Cook said. “Two, it’s going to help get people over here so they will go to the car wash so other people can make money. Three, it’s going to make me money for this so I can go to Hawaii.”
As the car wash wrapped up at 1:00, Kay Cook wasn’t sure how much money had been raised overall. She was certain, though, that the fundraiser held meaning beyond the dollars earned.
“While we probably didn’t make a huge amount of money, I think it has been really good for the kids to get up and have to work to earn some of their money for Hawaii,” Kay Cook said. “Everyone seems to be having a good time so I think it’s been a real benefit.”
By Alyssa Sykuta
The  band heads to Hawaii during spring break? Have you made your plans yet? What are they?
Delete Image
Align Left
Align Center
Align Right
Align Left
Align Center
Delete Heading