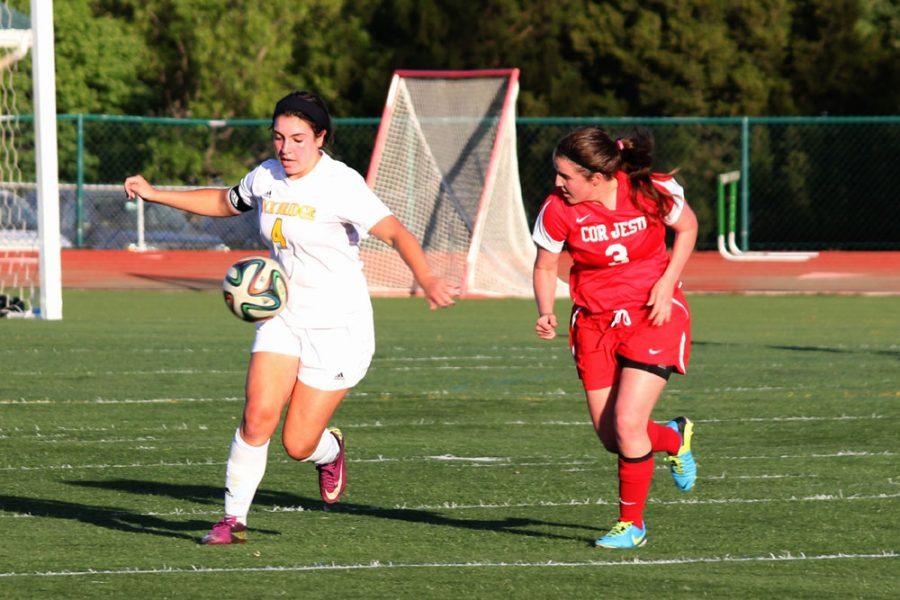 Staying ahead of her opponent, senior Laurie Frew moves down the field. Bruins lost to Cor Jesu 1-3 during the Varsity girls soccer game, May 9. Photo by Amy Blevins

The girls junior varsity soccer team celebrated another win Wednesday, May 14, in their match against Moberly, clearing the board with a final score of 3-0. The game was a critical one, as the JV girls are headed to their final tournament in St. Joseph’s Academy this weekend.

Fresh off the thrill of a success, sophomore Tommi Brundage, who plays defense for the team explains that she and her teammates are more confident in their abilities to snatch a few more wins at the upcoming tournament. Brundage believes that Moberly’s game provided the JV girls the opportunity to revise and refine their plays and positions in order to ensure future successes.

“I feel that in the first half we weren’t playing to our full potential. The normal starting team got split up into two separate equal teams, so it was different, but everyone got playing time,” Brundage said, “but eventually I think we worked it out, and gave a pretty strong performance.”

In addition to the coaches putting in all the JV girls in to play the field against Moberly, Brundage elaborates that some of her teammates had the opportunity to switch their positions to ones they may not have been typically accustomed to. Though the change-up was not typical of a normal girls soccer match, Brundage believes that the alteration provided a fresh perspective and experience for the team.

“I think my team members and I played a fair game,” Brundage said. “Some the players moved around and got to play different positions, which doesn’t usually happen. That was fun because the defense doesn’t usually get the chance to go up and score.”

From this player variation, a number of highlights and memorable plays surfaced during the game. Brundage attributes these noteworthy plays to the bold and unique move to temporarily alter the roles of some players.

“Some of the major highlights or moments I will remember were when Molly Klein was put in defense but dribbled all the way up and assisted Randi’s goal,” Brundage said. “Another highlight would just be that a bunch of defense players got to go up to play in the forward position.”

The change in plays was no accident, according to sophomore Claudia Dunscombe, who plays forward for the JV team. Dunscombe believes that since Moberly has never been a particularly strong competitor for the RBHS girls soccer teams, all the players had the opportunity to play in the match, which Dunscombe thinks will assist the JV girls in their preparations for the upcoming tournament.

“We had fun supporting one another and working as a team, and all the JV players got time on the field,” Dunscombe said. “I think this match pumped us up for our final tournament this weekend. The St. Louis teams are usually pretty tough, but coming off of this win, we have the confidence to do well at St. Joseph.”