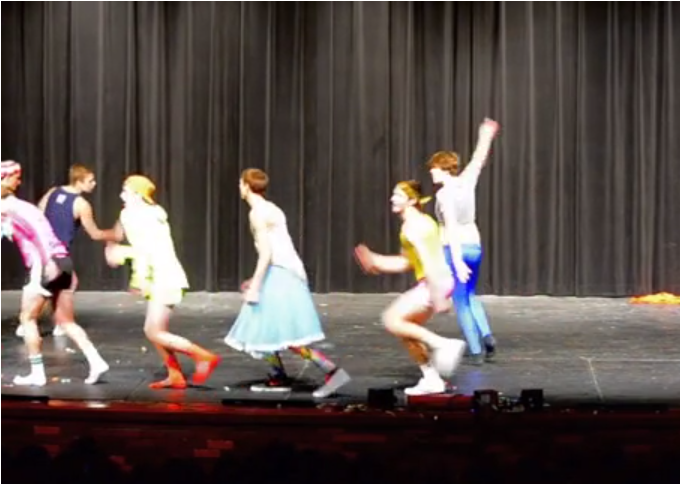 Last night, the PAC housed Golden Cow, RBHS’ annual lip-syncing and dancing contest for charity. Though the $2,341 dollars raised this year went to the Children’s Miracle Network instead of last year’s Rockin’ Against Multiple Sclerosis, the auditorium was packed as ever with students eager for the night’s performances.

The groups performing this year were “Bring It On: Rock Bridge ‘Steer’ Leaders,” “#Hashtag,” “The Milk Men,” “Good Girls Gone Bad” and “Deja Moo.” Wearing everything from cat costumes to almost nothing at all, group after group made the audience alternatingly laugh and cringe.
“The outfits were probably my favorite,” senior Sammy See, who attended Golden Cow yesterday, said. “Most of the boys were in running shorts and spandex, which was really funny.”
Though all the groups gave each other a run for their money, the judges had to make a decision at the end of the night. First place went to the extensively choreographed and scantily-clothed “The Milk Men,” second place went to Deja Moo, which featured a cameo from last year’s crowd favorite, “Pug Motivation,” while third place went to the risque “Good Girls Gone Bad.”
Senior Jacob Winton, member of winning team “The Milk Men,” said his team put in a lot of work to snag the winning spot, trying to practice “three or four hours every day for the last three or four weeks.”
“It’s pretty amazing [to have won],” Winton said. “I mean we practiced a lot, but we thought we had lost after we watched “Deja Moo.” They really killed it, so it’s crazy. It’s just cool to be able to get out here in front of everybody. When we looked out at the beginning and it was packed, we all just got so excited. It actually means a lot to be able to get out in front of everybody on stage.”
Though senior Kyle Teter’s team, “Deja Moo,” didn’t win first place, he still believed the experience was valuable.
“Second’s the best, everyone knows that,” Teter said. “It was a fun thing to do.It’s something you don’t get to do all the time, so senior year, it’s a good way to end it.”
Katherine Sasser, AP World teacher moonlighting as a Golden Cow judge, said making the decisions was tough, with each placing team neck in neck. Regardless of who won, though, she said the whole night was memorable.
“It was a lot of fun. We got the close-up view of all of the entertainment and there were a lot of really great extras in the performances, so it was a lot of fun,” Sasser said. “I think it’s a really fun opportunity to get together, it raises for money, right, so that’s always good, and it’s just great to see students out of the classroom context, having a good time, getting creative, engaging with their peers, I love all that stuff.”
By Urmila Kutikkad