Pep rally to be held Friday in Main Commons during lunch 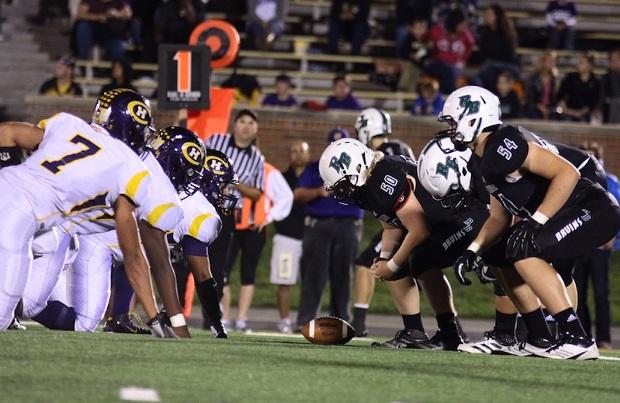 The RBHS-HHS lineup is tense as the cross-town rivals face-off in Faurot Field at the annual Providence Bowl. Photo by Asa Lory

During lunch on Friday, Sept. 27, Rock Bridge High School will be holding a pep rally in advance of the football game later that night. The Providence Bowl, held this year at LeMone field at Hickman High School, is at 7:00 p.m.

According to senior Tarus Moore, home-school coordinator and football coach Joe Collier organized the event and will hold it in the Main Commons beginning at noon.

Three musical groups will provide the entertainment for the pep rally: Poundgame (PGM), Team Top Siders (TTS) and Savage Block. PGM’s members are senior Antwon Turnage and HHS graduate Chris Addison. Moore and RBHS graduate Anthony Mullen make up TTS. Another RBHS alum, Landon Fitzpatrick, is the only member of Savage Block planning to perform. Moore and Turnage are both members of the Bruin football team.

“We will be performing a variety of songs just to get everyone excited and pumped up for the game tomorrow,” Moore said. “The school has been kind of dead this week hype-wise, and we’re hoping the lighten the place up with our music and performances.”

Moore said they helped start the event in order to strike up school spirit in RBHS students. No one had planned any other events leading up to the game other than the Bru Crew’s tailgate, which they will kick off at 4:00 p.m. on Friday.
“If you were a visitor and came into our school this week, you would never know that we had our rivalry game this week,” Moore said. “It’s important for everybody to be turnt up at the game because it sets a good environment and feel for us guys on the football team and the fans who are there supporting us. It just makes everything a lot more fun.”