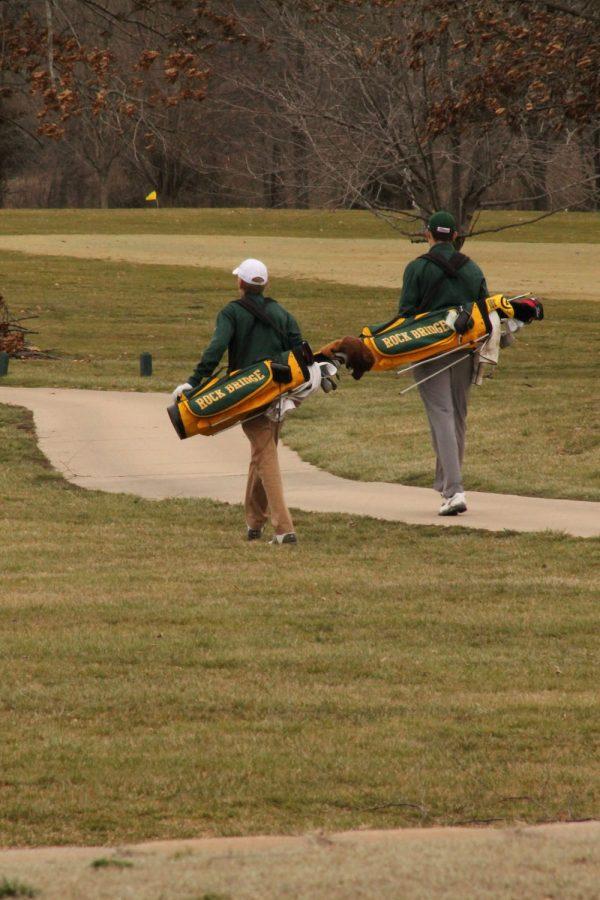 Josh Ripley
The boys golf team headed to Springfield on Monday, knowing they had a shot to make a lot of noise at the Class 4 state championship.  Although winning appeared to be a long shot, the sophomore-laden Bruins were confident they could make a splash.
“Realistically, we wanted to place top three,” sophomore Sam Harrison said, “but winning never left our minds. We thought we had as good a chance as anybody.”
The Bruins’ lofty goal did not seem to be out of reach after the first day.  Halfway through the two day event, RBHS sat in fourth place, a mere eight strokes behind leader Marquette.  Sophomore Matt Echelmeier paced the Bruins with a first round score of 72, while fellow sophomore Jack Knoesel sat right behind with a 73. Junior Jackson Dubinski shot an 80, while sophomores Ben Humphreys and Sam Harrison shot 80 and 85 respectively to round out the Bruins’ scoring.  Knoesel was satisfied with his start but admitted he thought the team could have placed better.
“Me and Matt played pretty well; we put two really solid rounds out there,” Knoesel said. “As a team I thought we could’ve been a bit higher. I guess overall we fell a little short of expectations.”
The second day the Bruins remained within striking distance but couldn’t advance any further and settled for fourth in the end, trailing champion Timberland, second place Rockhurst, and Marquette, which fell to third after leading following the first round.  The Bruins scored 632 total points, which put them 13 strokes behind Timberland.
Knoesel was the top finisher for Rock Bridge with a 75, followed by Humphreys and Dubinski, each with ‘80s.  Echelmeier, the top scorer for the Bruins on Day One, turned in just the fourth highest team score with an 82.  He was still able to tie for fifteenth overall, joining Knoesel in garnering all-state honors. Harrison rounded out the scoring, matching his 85 from the first round.
“I didn’t play well the first day; the second day felt a lot stronger, though,” Harrison said.  “I came out with a 48 on the front but closed with a 37 on the back, so I finished well.”
Knoesel, who finished tied for fourth overall in the 52-man tournament, said he was happy with the way he played but made it known he was hungry for more.
“Winning was my goal,” he said. “I’m not disappointed in the way I played but I’m not satisfied either.”
Although the season has ended, Knoesel says he isn’t entering any kind of off-season.
“Well, really my golf season has just started,” Knoesel said. “I’m going to play a lot of tournaments over the summer and keep doing what I’ve been doing.”
RBHS came up short this year. However, they return their entire varsity roster next season, and with sophomores occupying four of the five varsity spots, the boys appear set for a couple years to come.
“A team title is within reach for sure,” Knoesel said.  “We are all coming back and we are all going to get a lot better.  Personally an individual title is definitely realistic. I’m ready to get started again.”
Delete Image
Align Left
Align Center
Align Right
Align Left
Align Center
Delete Heading