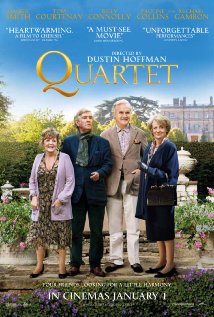 Image used under fair use doctrine

Julia Schaller
To say my friend and I were the youngest people in the theater is no understatement. I knew going into the movie that the stars of the film were all aged, but I didn’t, however, expect to be a minority. All audience members had graying hair and deepening wrinkles.
Directed by Dustin Hoffman (The Graduate), Quartet was definitely meant to appeal to an older crowd, yet still proved to be quirky and cute. Main actors Billy Connolly (Brave), Maggie Smith (Harry Potter films), Tom Courtenay (The Dresser), and Pauline Collins (Shirley Valentine) did phenomenal work guiding the movie, always keeping the characters intriguing.
In the film, a group of three musicians, Cecily (Collins), Reggie (Courtenay), and Wilfred (Connolly), who used to be in a quartet together, live in the same home for retired musicians. The fourth member of their old quartet group, Jean (Smith), eventually shows up to live at the home with them. Every year, the retirement home has a gala that, in a way, decides if the home will be able to run for the next year based off funds. Cecily, Reggie, and Wilfred want to sing one of their old operatic quartets for the gala, but Jean refuses to sing.
While weaving in beautiful music and aged wit, the plot delves into the struggles of the old, the quartet group’s obstacles in convincing Jean to sing, and even the mysterious love history between Jean and Reggie. The film was uplifting and perky, but, in all honesty, I don’t believe it was a movie that many teens or young folk would enjoy very much, at least not as much as their parents or grandparents. But if you enjoy music and retirement homes, I would delightfully recommend this movie.
By Julia Schaller
Delete Image
Align Left
Align Center
Align Right
Align Left
Align Center
Delete Heading