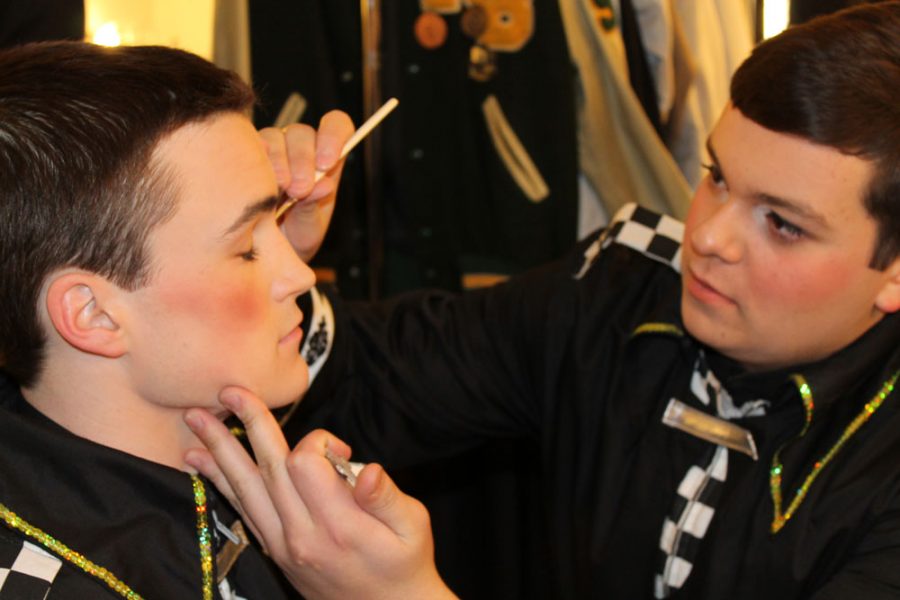 Daphne Yu
In the last competition of regular season, the RBHS show choirs Satin n’ Lace and City Lights left it all on the stage, with Satin n’ Lace bringing home second place and City Lights beating out all choirs to snatch first. In the aftermath of the thundersnow storm that hit Missouir Thursday morning, the two groups were wary about traveling conditions.
“It only caused some worry as to whether we’d be able to make the competition,” senior City Lights member David Wang said. “Once we hit the road, it didn’t really affect us at all.”
After sitting on coach buses for four hours to attend the Carthage Show Choir Festival, the two groups arrived at the competition site around 10 a.m. Satin n’ Lace had two hours to prepare before they went on for their first performance.
“Some of us got breakfast to eat, since we had some time to spare,” junior Satin n’ Lace member Raychel Mooney said. “Then we all got changed together, into our costumes, getting pumped by singing various songs together … We have a cheer that we always do before going on.”
Satin n’ Lace – the all-girls group – had two hours to prepare before they went on stage at a quarter after 12 p.m., and finished the preliminary round in high spirits. The group felt confident and since they put in the effort, most members didn’t really worry about the performance, Mooney said.
City Lights – the mixed show choir – followed a couple hours later, with their preliminary performance at around 4 p.m. Both groups went back to perform – Satin n’ Lace took the stage at around 6 p.m., and City lights gave the audience an award-winning show less than two hours later at 7:30. Both groups’ members and parents alike noted that the show choirs did extremely well, their best yet, Wang said. However, with any performance, nothing is ever perfect. In the City Lights performance, Wang usually ends the program with an impressive backflip, something he has done many times with ease, but not last night.
“After finals I thought, ‘Dang it! I didn’t stick the backflip!’” Wang said. However, “I felt proud of the great performance we gave, but people’s minds usually go straight to the inconsequential things that went wrong.”
Next came the wait time for other choirs to finish their final performances and for judges to tally up the scores. When the time finally came to hear the results, it was past 9 p.m.
“We all packed in there, like sardines. Every choir was like part of our family, and we all just kind of waited together, in excitement, getting more excited as each place holder was called,” Mooney said. “As soon as we heard that the other choirs got third and down, we knew [Satin n’ Lace] and City Lights were one and two. And that was all we needed. We didn’t really care who got what out of the two of us, we were all just one big, ecstatic, crazy show choir family.”
The next step for the show choirs will be Nationals in April, which will take place in Nashville, Tn.
By Daphne Yu