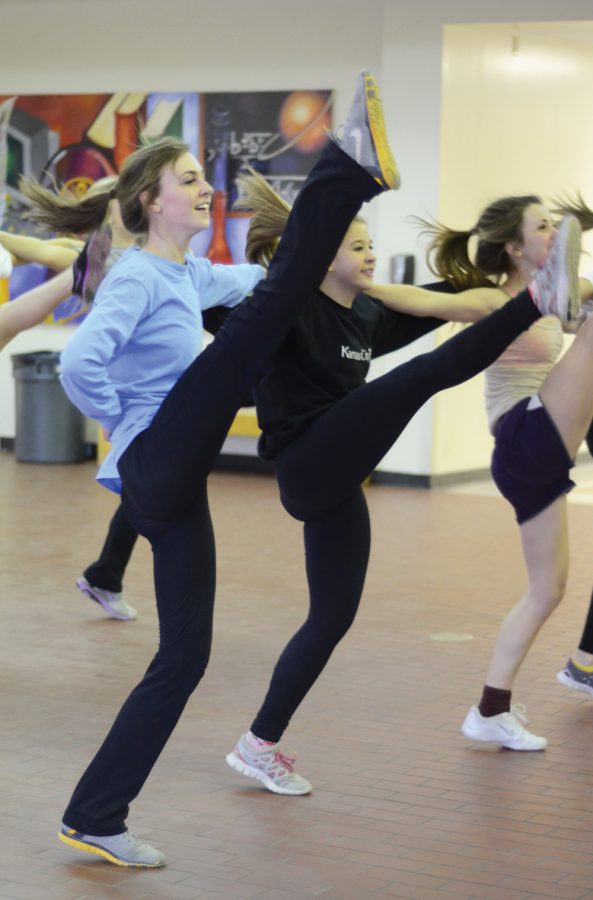 Maddie Magruder
The competition dances performed by the Bruin Girls haven’t changed just once. They haven’t even changed twice. They’ve changed more times than the team can count.
The loss of team members was a result of two dancers moving away and several injuries. This caused formations and steps of the dances to change continuously to make the routines look sharper and ready for competition season.
Senior Leia Tarbox said every year the team loses girls during competition season, but this year, more dropped than she has ever seen. Tarbox said it takes hard work to keep the dances strong as girls leave the team.
It takes “more practice,” Tarbox said. “Same dances, we change the choreography sometimes, and the formations and everything, a lot of that has been changed around. When we first learned the dances, it was completely different than now.”
Tarbox, one of the team’s original four captains, had to get surgery for a shoulder injury, taking her out for the rest of the season.
“It’s gonna be sad for me because I have done it since [sophomore year],” Tarbox said. “It’s my second year as captain. I’m so attached to the team … and we’re also going to nationals this year, so it’s gonna be a lot different. My sister’s on the team, so I’ll still have a tie to it that way, and I’ll still be around ’cause I’m still a captain.”
Even though she’ll still be around for practices and competitions, the team will miss her dancing presence.
“[Tarbox] was a big part of our team and really … propelled our team,” sophomore Hannah Harper said. “We’re just going to have to learn to get stronger without her.”
With practices three days a week, as well as a four hour practice on the weekends, the team spends its time getting stronger and improving their techniques.
So far, the team has gone to the regional competition where they placed fourth for one dance and didn’t place for the other. Coach Shannon McDaniel said they went to the competition nearly two months earlier than it is held normally, so they did well for where they were thus far in the season.
Two girls sat out of the dance days before the competition, causing last minutes changes and rearranging.
A severe allergic reaction caused senior Morgan Nuetzmann to be unable to perform in the regional competition on Dec. 1. Although she knew this would be tough on her team, and they would have to re-configure their articulately choreographed dances, she disappointedly contacted her coach with the bad news.
“[Nuetzmann] called me from the bus and said ‘I can’t go’,” McDaniel said, “so we kind of figured things out on the way to St. Louis and went with it. Someone else we decided on Thursday wasn’t going to dance, so we redid everything Friday night [and] then again on Saturday.”
Despite the setbacks, the Bruin Girls plan to attend the state competition in February and national competition in March in Florida.
The team is competing in nationals for the first time in several years, and McDaniel said preparing for nationals is the main focus of the team.
“The last time Rock Bridge went to nationals, they came back with a national title,” McDaniel said. “So we don’t want to go with the hopes of just a first place trophy because obviously to go and make finals and end up in the top three is amazing. That’s what we’re hoping to do.”
McDaniel said even though the team has dealt with lots of injuries, losing girls and changes, they have a positive outlook for the rest of the season. McDaniel is excited to see what will come from the season, particularly at nationals.
Nationals “is one of those things that when you go to talk to girls who’ve been on this trip before on previous teams, it’s always their favorite part of what they’ve done,” McDaniel said. “We don’t know what to expect about what other teams will be there or really what other teams will look like, but [we are looking forward to] just going and doing the best we can and having a good time.”
By Maddie Magruder
Which is your favorite song the Bruin Girls perform to?
Delete Image
Align Left
Align Center
Align Right
Align Left
Align Center
Delete Heading