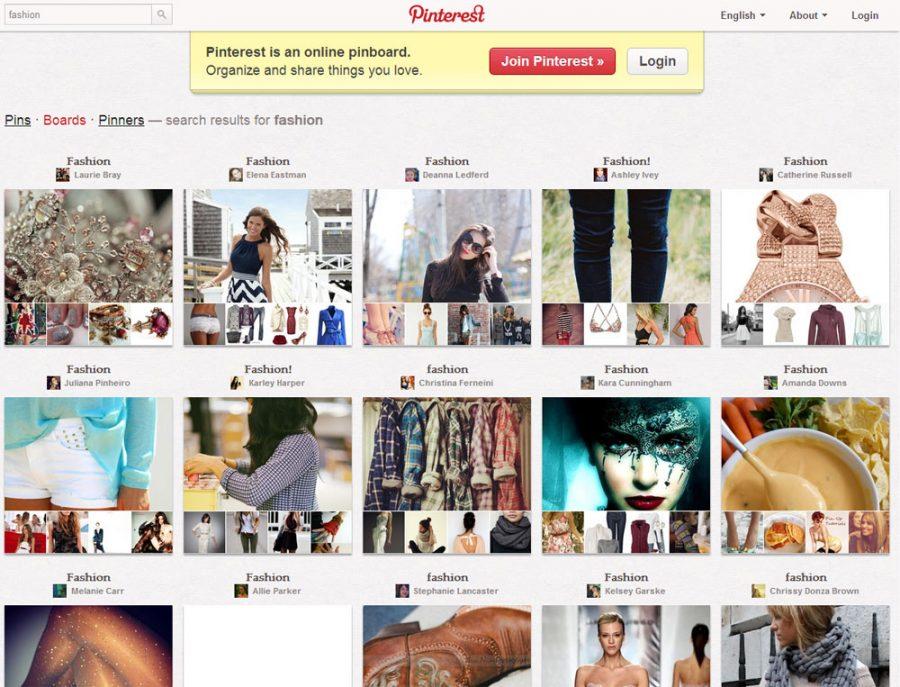 Julia Schaller
Sitting, eyes glued to the computer in a passionate daze, clicking the mouse elatedly for hours, pinning and repinning anything and everything on Pinterest was how sophomore Taylor Dolezal spent her first couple weeks after getting a Pinterest account.
Dolezal was entranced in the magical land of Pinterest, she said, a website with pictures of everything. From cute animals to house décor, Pinterest has it all.
As stated on bluegrass.com,“Pinterest is a social bookmarking tool used to “pin” images found around the Web into categorized collections, or boards. Think of it like an interactive, shareable scrapbook. Like any good social network, you can follow other users, share their content, make comments, and tag users”
Pinterest includes pictures that fall into a variety of categories, such as home decorations, weddings, fashion, quotes, art and architecture, and films and books.
Dolezal established many styles similar to her own that she liked on Pinterest and gathered new ideas from the site. She discovered new nail designs she had never seen before and started using the designs to paint her nails. Dolezal said Pinterest challenged her to use creative designs and turn them into unique styles for herself.
“I used a lot of things on Pinterest for my own fashion,” Dolezal said. “On Pinterest, there are a lot of scarves. It got me hooked on scarves and boots. And I see a lot of girls at Rock Bridge who have the same style as the ones popular on Pinterest now. For example,  a typical Pinterest outfit for girls is probably skinny jeans, a plain-ish T-shirt, a scarf and boots.”
Dolezal said many girls will paint their nails in the way they see on pinterest, or they will have the same outfits or close to it or similar hair styles. The cute ways to tie scarves Pinterest displays can completely change the look of an outfit using the same scarf, Dolezal said. This is convenient for Dolezal because she doesn’t have to wear a new scarf every day, she said. She can change up her outfit using the same one. She also said she really likes the nail polish patterns she sees on Pinterest, especially the zig-zag designs or the sparkly ones.
Pinterest is an influential website; according to the website Repinly, the average activity of popular pinners is 2,673 pins, and the average number of Pinterest boards is 34.
Even though she said she sees Pinterest styles and ideas around school, Dolezal said she also notices a lot of the similar styles at home too. Not only did Dolezal use Pinterest all the time, she said her stepmom liked using Pinterest for her style and for around-the-house ideas.  Dolezal said her stepmom and her both enjoy using Pinterest very much and share clever Pinterest ideas with each other for the house.
“And there’s the whole dryer sheet thing,” Dolezal said. “You can put dryer sheets on your little fans, and it makes the room smell good. My stepmom definitely does that, and she’s like, ‘I got it on Pinterest.’ I just love Pinterest. There are so many things you can get from it. And it’s like, everything you see on there you want, you know?”
Senior Duyen Tran, much like Dolezal, uses Pinterest to inspire her choice of apparel, though some of the outfits don’t exactly suit Tran’s tastes. Tran said she likes adding touches of her own personal tastes to styles she sees on pinterest, as some of the apparel isn’t as modest as she likes.
“I use things from Pinterest to inspire what I wear,” Tran said. “I see things on Pinterest and I’ll see it on someone at school, and it’ll be almost the same shirt, but not exactly. Some of the styles show too much skin for me, so I try to adjust what I see to still make it cute and fashionable for me, so it’s a little different. Like the lower cut shirts or the really high belly shirts. I try to find what looks best on me, while not trying to show too much skin.”
Not only does Pinterest display pictures of people modeling clothing, but the site also includes photos of outfits for you to take with you and draw inspiration from, Dolezal said.
“There’s a thing on Pinterest, and it tells you to print out the pictures of the outfits that you like and hang them in your closet to inspire you to wear that outfit you want to, and my stepmom did that,” Dolezal said. “She printed off like seven pictures, one for each day of the week, and she hung them on the board thing in their closet, and my dad was just, like, ‘Really?’”
Dolezal said it encourages creativity and fashion savvy-ness, and some say they spend more time on it than they would like, as if it’s an addiction. Dolezal said she found herself on Pinterest way too much, and it was a big procrastination mechanism.
But senior Drew Floyd said Pinterest isn’t for everyone. Floyd wonders why so many girls are enamored by Pinterest.

“I don’t use Pinterest because I’ve just never really seen the need for it,” Floyd said.”To my knowledge, it seems to be a site primarily for sharing photos of wedding ideas, adorable puppies and egg roll recipes. I am not currently engaged, I already have a dog, and recipes are a few clicks away thanks to Google, so I don’t feel like I need one.”

Floyd said pictures from Pinterest often pop up on Facebook, many of them having storybook wedding ideas or “descriptions of the perfect man.” Although many girls enjoy the wonders of Pinterest, Floyd said he isn’t impressed by all that it has to offer and its depictions of reality.
Girls using Pinterest “can dream all they want, but quite frankly, these visions of perfection just aren’t realistic,” Floyd said. “It may get their hopes up only to be let down by the unfortunate reality that the world isn’t as perfect as Pinterest says it is.”
While Dolezal said she loves Pinterest, she had to take a step back from the website because she was spending more time than she liked on it.
“I have a Pinterest, but I don’t use it anymore because I was addicted to it,” Dolezal said. “I used it a whole bunch before, but now I don’t use it as much because I was on it a lot. It’s so addicting because it’s so interesting to see a whole bunch of new stuff or easy ways to use the stuff that you already have. The clothes that you have, you can make them look a lot cuter than you probably would have thought to.”
Dolezal said finding pictures of her interests that are her cup of tea is what kept reeling her in. According to pinterest.com, the goal of Pinterest is to connect people through what they find interesting. Pinterest.com states that they think people with a favorite book, toy or recipe can reveal a common link between themselves.
The secret weapon to why Pinterest has so much draw, visualnews.com states, is “the simplicity of its design. The unlimited scrolling allows people to browse through content in an almost mesmerized state, visually scanning images with the action buttons hidden until they are scrolled over. Not too different, Pinterest also satisfies the Internet addiction of hoarding images and content. Have a certain interest? There’s a board for that.”
By Julia Schaller
How much time do you usually spend on Pinterest a day?