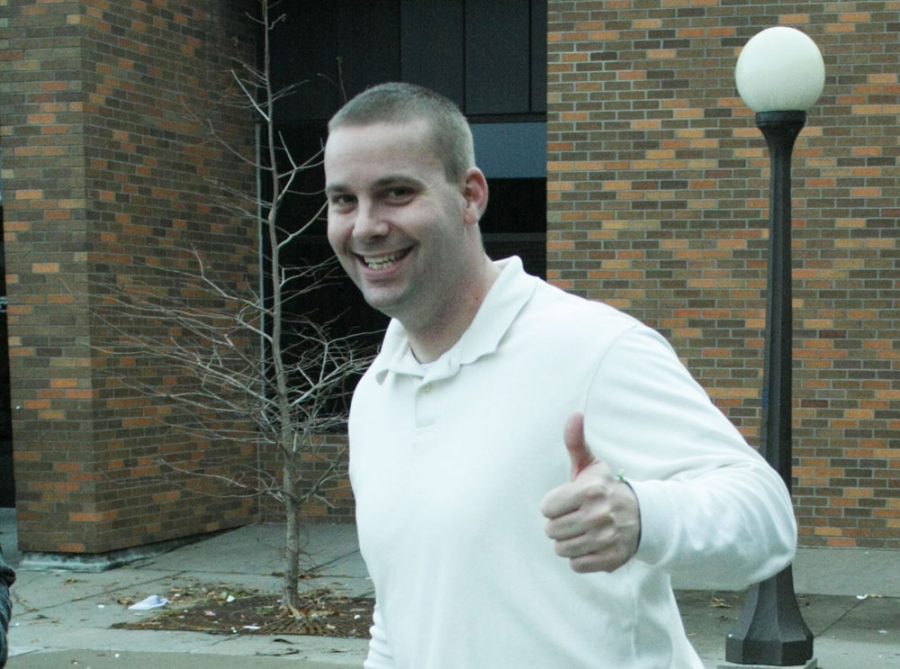 Adam Schoelz
Yesterday could not have been an easy day to be Mark Maus. After an email to RBHS teachers outlined the most recent proposal for start times, many were miffed, to say the least, that high school was scheduled to start at 7:20. By the time Bearing News published a story on the proposal, several teachers had queued to voice their displeasure with it, and while no one was steaming, it still could not have been easy for Maus to stand all that negativity without being brought down a little bit.
And yet his buoyant nature prevailed — despite the stress, the guy still showed up to the Show Choir premiere concert that night and even stopped in after to congratulate the singers.
Between the end of school and that concert, Maus and the other secondary principals convened in an emergency council of sorts to discuss the notably unpopular notion of high school starting at 7:20 and agreed upon a counter proposal that the start times would be changed to high school starting at 8:20. There are a number of things that deserve to be lauded in this action.
First of all, Maus is standing up for his school. It’s not easy to stand up to the fury machine that is elementary school parents, and even the fiercest supporter of any cause will surely be wilted by their unending dissatisfaction. To this end, Maus could have taken the easy route politically and simply caved to the original proposal. However, Maus listened to the complaints of teachers and students and did not back down.
Secondly, the principals of the middle schools that volunteered to take the odious 7:20 a.m. start time should be congratulated for taking the high road. Knowing that high schools taking the time would spear before-school activities and zero hour classes, the middle school principals took on the burden of the earliest start time, in the process fostering goodwill between the schools.
Really, with the exception of the proposal itself, the whole situation that could have easily dissolved into name calling was handled quite well by administration. It can’t be fun to make a decision that people will criticize regardless, but the administration has defended RBHS from a start time that would be ubiquitously despised and made a stand at the right time to secure an 8:20 a.m. start time in the latest proposal.
Now the secondary schools and superintendent Dr. Chris Belcher must convince the school board of the validity of this counter proposal over the transportation committee’s. While the opinion of the superintendent and the principals of many successful schools should carry some weight, when it comes to the board, a success for this counter proposal is still uncertain.
We can only hope.
By Adam Schoelz
This opinion piece is labeled as such on the desktop version.