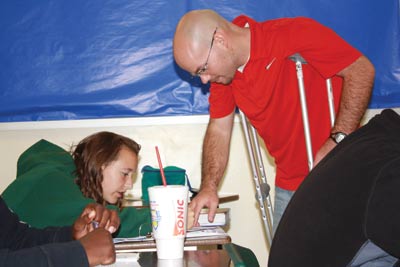 Back in the game: Math teacher Travis Martin helps sophomore Katie Wheeler with a geometry problem while on crutches. Martin said RBHS students are the nicest he has ever encountered while teaching. Not an hour goes by without someone asking him whether or not he needs help. Martin broke his leg in a motorcycle accident over the summer while heading to Wyoming.

Parker Sutherland
Freedom with responsibility is a cornerstone of RBHS, weaving its way into the hearts and minds of every Bruin. Students are supposed to represent this very point, showing the validity of this motto to the new faces of RBHS teachers.
The 2011 fall school year brought 17 new teachers to eight different departments. Only one of them had never been to RBHS, or in the Columbia environment.
Special Education teacher Kathryn Kemp is brand new to Columbia, having moved from St. Louis for her very first year of teaching. She served there as a paraprofessional and substitute teacher. In her entrance to Columbia, RBHS has already shown her the loving and responsive nature through contact and actions.
Kemp moved to Columbia when the district interviewed her, and knowing her daughter went to University of Missouri-Columbia, she couldn’t help but accept the offer of CPS. Kemp hadn’t heard of RBHS before and expected an unhelpful and unwelcoming teaching staff and departments which she said she had faced in her previous years.
“By me being a first-year teacher, there are a lot of processes of doing my job that I didn’t know how to complete and instead of them leaving me out there, searching for a way to complete these processes and get my work done,” Kemp said. “I had overwhelming help from staff members in my department just helping me.”
Math teacher Travis Martin wouldn’t have been as surprised by such welcoming actions. He may appear as a new face to most students, but Martin taught at RBHS from 2004-2009 before moving to Washington D.C. for his wife’s medical degree.
They moved back to Columbia for the family environment they were missing in Virginia. Martin wanted his firstborn son, Reese, to grow up in a loving atmosphere.
As a returning teacher, he provides an interesting perspective on the continuities of the RBHS environment. To Martin, the ideal of freedom with responsibility has been left untainted. The processes by which he taught are still applicable under new administration.
From 2007-2009, Martin had a student in his class with hyper-anxiety when taking tests, leaving her unable
to concentrate fully during an exam. She was a distraction to the classroom and herself, and because of the schools understanding and commitment to students, Martin was able to give her a different location and time to take tests in order to meet her needs. The student was in Martin’s precalculus and calculus classes and had great angst in the testing environment, which is something a test enabling extended time is unable to provide.
Through strenuous work with the student and various processes to relieve stress, Martin was able to get her to take the AP test, on which she received a four. RBHS gave Martin the freedom to allow the student to have extra time, and it worked to her advantage, which played a large role in his decision to return.
“Some students are given extended time because they have been tested and get it because of the results of those tests, but here I also have the freedom to give some other students extended time if I know circumstances dictate they need it, even if they’re not tested,” Martin said. “I don’t know how that would set with some other schools.”
Kemp had many doubts about starting this year at RBHS, due to her previous grievances of the lack of help and support at other schools. The other schools she worked at placed her alone in the field and expected her to finish it
without explanation or help.
At RBHS, Kemp has already seen the flowing love of the staff, finding what freedom with responsibility truly represents.
“I was afraid of lack of support [this year], which I had been accustomed to” as a paraprofessional, Kemp said. “And I was afraid of failing. Now I can honestly say those fears have been dissolved, and I am very positive and upbeat about my success, and it has been a wonderful ride thus far.”
By Parker Sutherland and Jude El-Buri
Delete Image
Align Left
Align Center
Align Right
Align Left
Align Center
Delete Heading