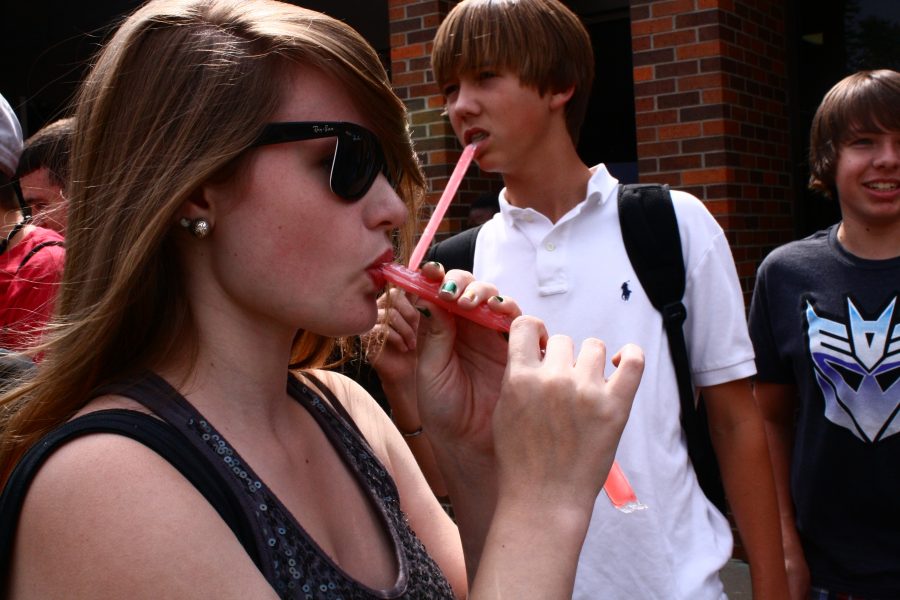 Jake Alden
Today marks the approximate 10-year anniversary of the student council sponsored RBHS tradition known as Popsicalooza.afternoon p.m., student council members set up various tables, speakers and coolers while preparing to serve over 1,600 popsicles to the RBHS student body.
Inside the activities office, other council members were cutting as many popsicles as possible before school let out. Amidst the activity, several sophomores forced their way into the office in a failed attempt to try to get early access to the popsicles. After some confusion, the sophomores were politely but forcibly removed from the premises. All of them later received a popsicle of their choosing.
The majority of students who attended the event received at least one popsicle. Many received more, with the estimated record going to a student who got his hands at least 20 packages of frozen juice.
Though they were popsicles a-plenty, many students were concerned about the traffic in the commons and the speed at which the popsicles were being handed out.
Student Council “should do stuff like this more often,” sophomore Hank Manson said. “But they need to cut the popsicles faster.”
All of the popsicles were purchased last Tuesday and Wednesday and were stored in the school’s culinary freezers until today. The costs of the event were paid for by the Student Council’s central fund, a decision unanimously supported by the council’s members.
“It’s our last grip on summer,” said senior and Student Council representative Sam Keller, “before the school year really gets down to the nitty-gritty.”
By Jake Alden
Video by Laurel Critchfield
Delete Image
Align Left
Align Center
Align Right
Align Left
Align Center
Delete Heading