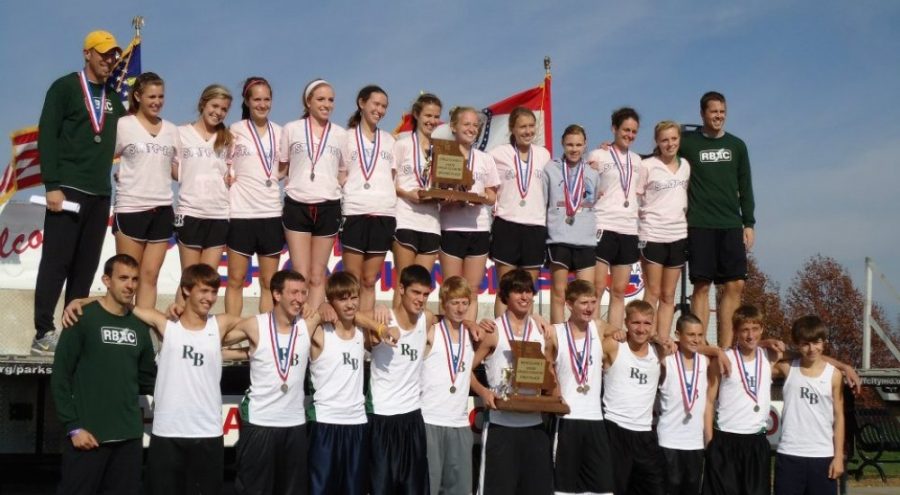 Both the boys and girls varsity cross country team pose for photos with their medals and trophies. Both teams broke school records at the state championship, with the boys raking in first place and the girls taking second.

Daphne Yu
Last Saturday, both boys and girls cross country nabbed the sectional championship. Today, the boys’  team refused to relinquish its status as best in the state.
For the first time in school history, RBHS boys’ cross country won the state championship with a total of 61 points, beating the 2nd place Rockhurst by 28 points. Also making history, the girls’ team placed second with a total of 124 points.
After a practice run Friday afternoon on the Oak Hills Golf Center in Jefferson City, the boys’ team competed first Saturday afternoon. Excitement ran through each member of the Bruin team in attendance. The junior varsity team showed full support of its varsity teammates – JV male runners had painted R, B, X, C or an exclamation point in green or gold on their chest and wore bright green or gold spray paint in their loose hair.

Not to be outdone, the girls on the JV team tied yellow ribbons in their hair. They spelled ‘2011’ on one side and a ‘STATE’ on the other, spicing up the tradition of wearing more generalized ribbons in previous meets. Members of the JV teams also waved a monkey head on a stick. This mascot, Sunder, stood tall above them as they screamed encouragement for their team.
Two miles into the 5k, senior Caleb Wilfong led the Bruin boys after an initial battle with another favorite for first – senior Zach Herriot from Rockhurst. Herriot placed first at state last year, Wilfong placed 13th; this year Herriot fell to 13th and  Wilfong snatched the gold with a time of 15:54, seven seconds ahead of 2nd place senior Kolton Sheldon from Lee’s Summit North. Also placing in the top 25 were teammates senior Jordan Cook, 7th, and sophomore Evan Schulte, 20th.
“I only saw the end of the race,” varsity runner senior Mackenzie Schimpf said. “But just from watching the finish, I knew they had won.”
A short time after watching the boys clinch first place, Schimpf joined her own team of six to run its race. Last year, the girls finished 11th at the state level. In 2008 the girls had placed eighth.
“All of us improved a lot from last year,”  Schimpf said. “And then we also had the addition of a freshman to the top five so that also helped the score at state.”
Freshman Kayla Funkenbusch did indeed help the team, being one of the only two Bruin girls to place in the top 25; she placed 25th, behind senior Samantha Garrett, 18th, followed by junior Megan Schulte,  Schimpf, senior Emily Wright, senior Annie Murphey and junior Lara Cox. The team was defeated only by last year’s state champion, Lee’s Summit West.
“We knew coming into this [Lee’s Summit West] was going to be a tough competition,” Schimpf said. “We were definitely the underdogs, but we just wanted to do our best and see where it took us. Placing first at sectional was another school best for us because we had never won before, so I think it was the confidence we needed to set another school record for us this week.”
Along with all the other state championship wins this fall season, the boys’ cross country team was ready to add to the list. Though the Bruins are ranked first in the state and 18th nationally, it was anticipated – but still overwhelming – for the boys’ cross country team to claim the state title.
“They’re just ecstatic – they have been working for this for so long,” Schimpf said. “They placed third two years ago, second last year. They finally won it this year.”
By Daphne Yu
additional reporting by Katie Wheeler