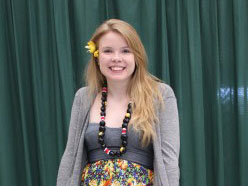 Dawn breaks and junior Morgan Widhalm pulls back the sheets, surveying her closet with eager eyes. She selects her outfit carefully, pulling on black tights and a feathery boa over her form-fitting dress. She accents her lips with crimson gloss—French-style—and slips on a pair of sleek high heels.
It’s the Thursday before a show choir competition, and she’s more than willing to uphold the “family tradition.” For the students of Rock Bridge’s show choirs, the last weekday before a competition is always a dress-up day, and each of these costume days cherishes a theme.
Past themes include ‘80s day, neon colors day, Harry Potter day and “prep” day. But today, March 1, the theme is a show choir favorite: “Modern Disney.”
Today’s theme ensures students dress in modern fashion, but must attempt to make the outfit look like a Disney character or what a Disney character would wear. Several of these outfits were inspired by the new websites Polyvore and Pinterest, which are gaining popularity among students as well as teachers. These sites host images and collections that allocate bursts of creativity — artwork, fashion showcases, so on and so forth — with expression of culture and personal taste. These pictures inspired show choir students, and they decided to give their own expressiveness a spin.
“Before a festival, the show choir kids always want to have some kind of theme day to get us pumped up and let the school know that we have something coming up,” Widhalm said. “And I think everyone in show choir, whether they will admit it or not, has a hidden Disney character inside of them. And we never get to show that off, … but this is a chance for us to reconnect to our inner child; some of the best memories of our childhood. It’s also just a fun way to show off our personalities and style, since it’s modern Disney and not just a costume. You can bring it to life in this century.”
However, show choir hasn’t been the only group to test its stylized fashion choices with theme days. Rock Bridge’s sports organizations often have “sweater vest” days before out-of-town games, and, of course, every day at Rock Bridge seems to be a Spirit Day.
“I think when you do something out-of-the-norm and people dress up with a common theme, they find this common unity,” Widhalm said. “People see others dressed like them and it creates this bond. Normally, you’re just people going through school, whereas now we’re Rock Bridge and we’re Disney characters. It makes this really cool unity.”
By Lauren Puckett
[nggallery id=71] Photos by Theresa Whang